Most of my “Bad Spanish” posts pick on the creators of road signs, shopping cart signs, and commercial packaging — folks whom you wouldn’t necessarily expect to be that adept at Spanish. In this post the “Bad Spanish” culprits should definitely know better. They are the folks in Madrid who sell tickets online for the Teatro de la Comedia, the city’s highbrow venue for classical Spanish theater.

As I mentioned in my previous post, I recently took advantage of a stopover in Madrid on my way home from Andalucía to attend a performance of El burlador de Sevilla, Tirso de Molina’s original (17th century) version of the Don Juan legend. I bought the tickets ahead of time and received them as an email attachment, shown below. As you can see, the ticket states Esta es tu entrada, using the familiar (tu) possessive pronoun, but then presente esta hoja ‘show this page’ using the formal (usted) command form of the verb presentar. Bad Spanish IMHO! 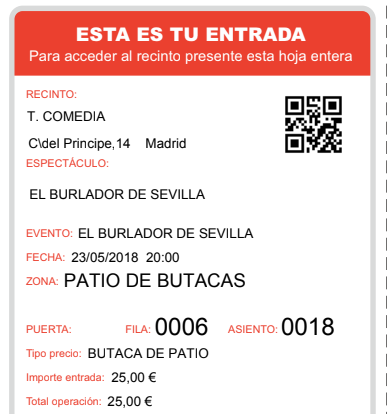 HOWEVER…this tú/usted switch is reminiscent of one I saw in a NYC subway car and blogged about a few months ago, a post that provoked many comments, including two from readers OK with the switch. So to be fair, perhaps it isn’t actually a problem here, and my “Bad Spanish” moniker is perhaps too harsh.

I did contact the ticket-selling agency to ask if the combination of modalities was accidental or deliberate, and received a most courteous and thoughtful reply, which I translate below.

From the perspective of our office (technical support for ticket sales) we don’t know exactly why this document uses the two different treatments. We’ll consult with the National Institute of Dramatic and Musical Arts to see if there exists a memorandum we can make use of that explains not only the types of texts and their distribution in the document, but also an explanation of the intentions of each text.

Personally, the second text (presente) seems more correct to me. It is a request made to the person who has bought the ticket, and it seems to be a basic norm of courtesy to address this person using the usted form. Perhaps in the first text they were aiming for a more impactful message and for this reason chose a different treatment.

From an anecdotal perspective, the use of tú and usted is a frequent topic of debate in [Spanish] marketing departments. The use of usted is positively associated with good manners and respect but also with a distance to the client, for which reason it’s common to make use of tú in order to attain greater closeness or empathy at the sacrifice of courtesy. In our own www.entradasinaem.es website you can see that we’ve used [informal] suscríbete and únete al inaem, thus linking the informal grammatical treatment with the idea of connecting with our institution.

As a penultimate note, please note the ticket price: 25 euros for sixth-row orchestra seats. ¡Qué ganga! And as a final note, El burlador ROCKED!!! So I got a great night out of it as well as a blog post. 🙂