I took advantage of a 24-hour stopover in Madrid on the way home from my recent trip to Andalucía to see El burlador de Sevilla, the original Spanish play about Don Juan. According to University of Wisconsin professor R. John McCaw, the play’s exact origins are unknown. However, it was most likely written — in Madrid, not Sevilla — in the early 1620s, by the playwright Tirso de Molina.

Since I majored in linguistics rather than Spanish, I had never read El burlador de Sevilla, and in fact didn’t know much about Golden Age theater. So before heading to Spain I bought a copy of Prof. McCaw’s edition of the play and studied it seriously. Just so you know what a good student I still am, after all these years out of school, here is a scan of one page showing how I marked up the book. What I learned was so interesting that I’d like to share it with you. 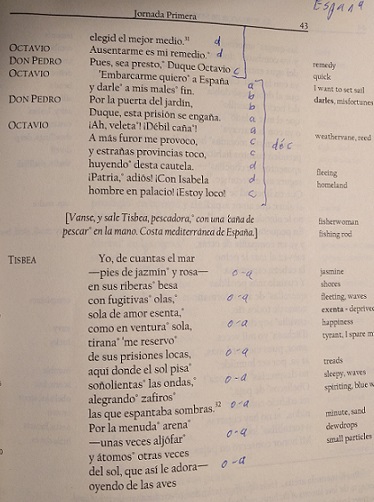 Golden Age playwrights like Tirso de Molina had to be incredibly skilled. They did what any playwright does — tell an exciting story, develop their characters, and so on — while at the same time fitting their Spanish into a set of specific rhyming patterns. As Prof. McCaw explains in his introduction, most of El burlador fits into one of six rhyming patterns, each defined by four parameters:

After marking up the entire text — this isn’t as crazy as it sounds, since the play is less then 100 pages long — I tallied how often each rhyming pattern was used. Here’s what I found:

I read the play a first time for its language and rhyming, and a second time to focus on its plot and characters. On the second read-through it became clear that although Don Juan was a lecher, his uncle was equally evil in his own way. He was a reprehensible enabler, helping Don Juan escape and lying to cover his tracks. The women in the play were uniformly admirable, and also strong, once they’d realized they’d been conned. (This cast of characters inevitably reminded me of today’s politics.)

As you can imagine, after so much preparation I was excited to finally see the play. The performance I saw was at Teatro de la Comedia, Madrid’s theater for classical theater. (See my “Bad Spanish” post about their tickets, and also the YouTube clip below.) It was an excellent production! I found Don Juan himself incredibly sexy — I could see why so many women fell for him — but in the scene where his father appears, he becomes sullen and quiet. The implication (for me) was that unresolved “Daddy issues” were at the heart of his neurosis. My favorite scene, Tisbea’s mad scene after Don Juan betrays her, was powerful. It was a real treat.

Surprisingly, after I’d worked so hard to get to know the rhyming schemes, they receded into the background once the play was “live”. The lines just sounded like beautiful Spanish.

I left the theater with a strong urge to learn more about…Shakespeare! Having never taken a Shakespeare course in college, I feel guilty that I now know more about Tirso de Molina than our greatest English playwright.