In an earlier post I summarized some asymmetrical differences between Spanish and English: the many distinctions in meaning seen in Spanish but not English, such as ser vs. estar (both meaning ‘to be’), and some seen in English but not Spanish, such as his vs. her vs. their (Spanish su). A recent thread on r/Spanish brought to mind another asymmetry of the second type: the Spanish verb esperar, which can mean either wait (for) or hope:

Comments in that thread pointed out an interesting difference between the two uses of esperar: when used without a direct object, esperar can only mean ‘to wait’. This means that, for example, Tienes que esperar cannot mean ‘You must hope.’ The only way to express this is via a work-around, such as Tienes que tener esperanza — literally, ‘You must have hope.’

I love it that after spending decades with Spanish I can still come across such fresh nuances of meaning and usage. This is, of course, a “glass half full” reaction — perhaps I should be frustrated that there is always more to learn. But for me, this richness is part of what makes languages interesting.

I remember, with excruciating clarity, my most embarrassing moment as a young mother. I was in the supermarket with my two-year-old daughter, Joanna. She always attracted a lot of attention because of her adorable face and her cherubic halo of blond curls. This made it even more humiliating when she decided that she was bored and piped up, in her clear voice that carried for aisles (if not miles), “Mom, let’s get out of this f**ing store!” That’s when I realized it was time for me to clean up my language.

What does this have to do with Spanish?

Last week my second-semester students all gave oral presentations. I had slipped, almost without realizing it, into the habit of dropping the English word so into my Spanish. And just like toddler Joanna, my students did as I did. More than half of them used so in their presentations instead of a proper Spanish hesitation word, like pues or bien. (In Spanish these are called muletillas ‘little crutches’, a term I adore.) As with the supermarket incident, the message was clear: it was time for me to clean up my Spanish.

This incident was particularly galling to me because I am well aware of the linguistic importance of sticking to the target language when using hesitation words. In fact, this was the subject of the best language lesson I ever had as a student, in a class with Harvard’s master French teacher Judy Frommer, Prof. Frommer had every student in the class read out loud a short, innocuous paragraph while attempting to stretch it out as long as possible with French muletillas, or tics de langage, such as bon, donc, alors, and bien. It was a lot of fun, and really drove home an important point: every time you lapse into your own language, even if just for a meaningless syllable, your brain has to do extra work to switch back into the target language.

So — I have turned over a new linguistic leaf, and am doing my best to keep my Spanish pure. I’m sure that my students will register this change, albeit not consciously, and I hope it will help them keep to Spanish themselves.

[Note: I entitled this post “Muletillas revisited” because I thought I had mentioned the topic before…but I haven’t. More’s the pity…]

¿Por qué? is climbing the charts:

Today is the official publication day of my book, ¿Por qué? 101 Questions about Spanish. Amazon’s book page is sort of funky — the Kindle price is wrong, and they are pessimistic about delivery times. In any case I would recommend ordering directly from Bloomsbury to take advantage of the 35% discount available with order code PQ101.

Please spread the word to your friends and colleagues who care about Spanish, and also consider asking your local and/or university library to order the book. If you patronize an independent bookstore that might be interested in stocking it, do contact me to let me know. Also, I love public speaking, and welcome any opportunities to talk to academic or civic groups within a reasonable radius of New York.

Between teaching and family obligations I have fallen behind on my blogging. Inter alia I want to write about:

and so much more! Hopefully I will soon find the time and energy to pick up this important part of my life.

With ten days to go till the publication of my book ¿Por qué? 101 Questions about Spanish, the Spanish-language newspaper El Diario has just published a full-page review (below) in its National Hispanic Heritage Month supplement; click here for a slightly more readable image. I hope that this review will help my book find a readership among the Hispanic community as well as academia, a long-held dream of mine. 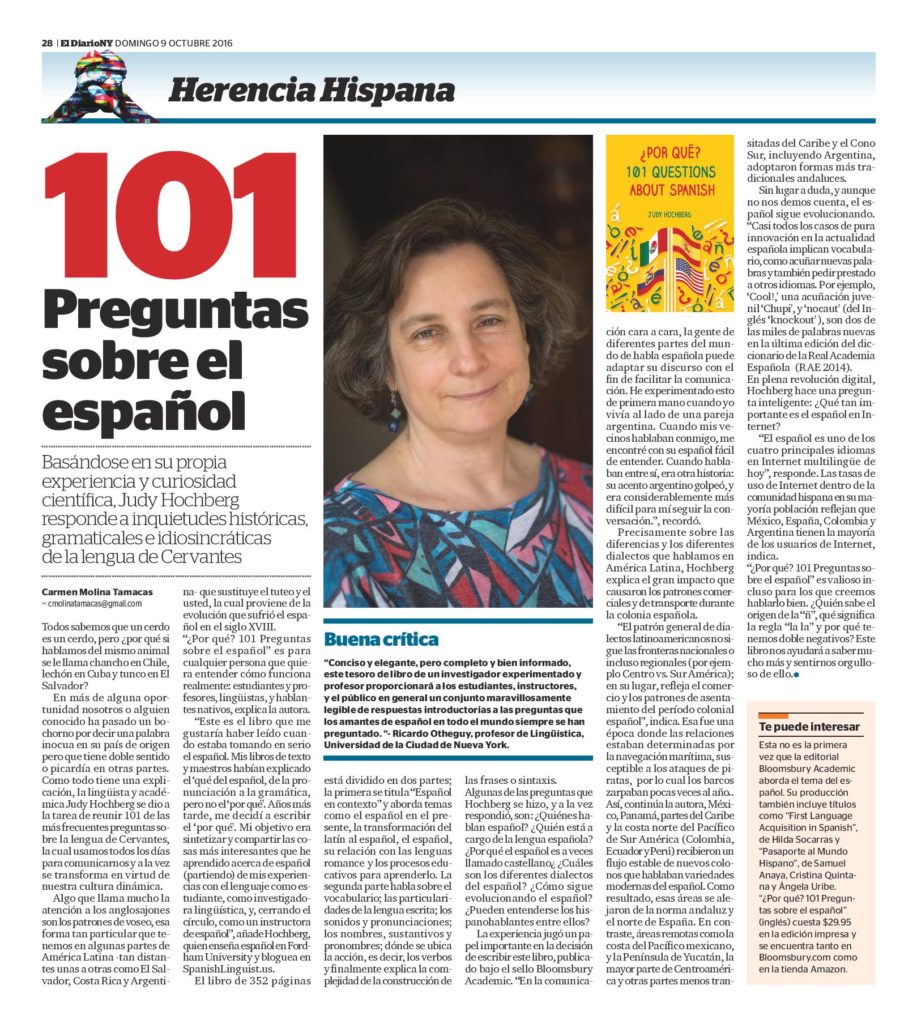