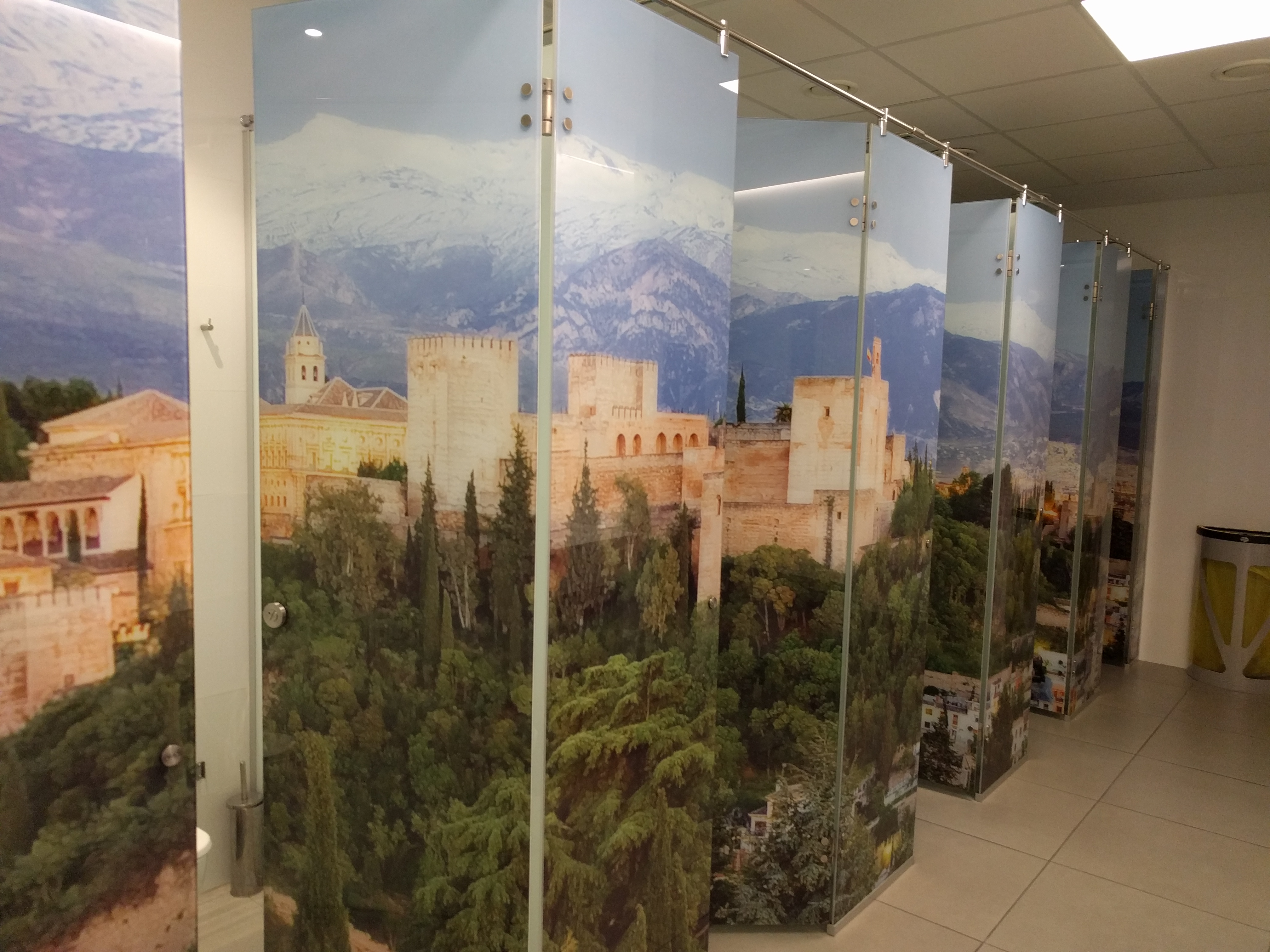 Yesterday I came home from a two-week trip to Andalucía, Spain’s southernmost region, with my consuegra Sue. My previous blog post, written just before our trip, describes our itinerary and includes a map of our route. We went everywhere by train, bus, and foot.

Although this was my fifth trip to Spain, I hadn’t been to Andalucía since my first trip, back in 1980 (!!), when a friend and I visited Córdoba, Sevilla, and Granada after attending a summer-abroad college program in Madrid. I remember loving Córdoba and Granada and getting sick in Sevilla. It was definitely time for a return visit, and Sue was up for a second excursion after our successful tour of northern Spain two years ago.

Andalucía is an ideal destination because it combines natural beauty with layers of human history. There is a lot to see and do, and Sue and I had a wonderful time. In fact, the only downside of our trip was the hordes of other tourists who had had the same bright idea. Sue and I share a low-key approach to tourism, and quickly became allergic to the large groups of camera-wielding tourists who thronged the top attractions. We found the omnipresent selfie sticks to be particularly intrusive, and hope that the Spanish Ministry of Tourism will soon follow the lead of the many public and private sites that have banned the devices.

Here is a city-by-city summary of our trip, with some of my own pictures and lots of links. I hope to follow up this post with others inspired by linguistic observations during the trip.

Without knowing it, we had scheduled our visit to Córdoba to coincide with the city’s annual Fiesta de los Patios, in which residents enter their beautifully decorated interior patios in a city-wide competition. This timing proved more of a nuisance than a blessing, since it brought more crowds into the city, and we didn’t have the patience (or interest) to queue up in the long lines to view the patios entered in the contest. On the other hand, we were happy to take advantage of the free flamenco performances scheduled around the city during the Fiesta. I’ll never forget a midday performance where we were close enough to see the male dancer sweat, and the female dancer lose the flowers out of her hair as she tossed her head passionately. We learned that flamenco refers more to music than to dance; in fact, a nighttime performance we saw at the Plaza de la Corredera had only singing (with guitar accompaniment) and no dancing.

In Córdoba the main attraction is the grand Mezquita, or mosque, whose forest of red-and-white striped columns is now interrupted by a cathedral. The Mezquita was one of the highlights of my 1980 trip and it was exciting to see it again. It is a popular attraction, so crowd avoidance was a priority. We stayed at a modest hotel right across the street from the Mezquita and made sure to queue up for the 8:30 am opening.

Another major attraction, substantially less crowded, is the Alcázar de los Reyes Cristianos. This fortress/palace features beautiful gardens, but we were most interested in some objects displayed inside: a stunning (and huge) Roman sarcophagus — note that its carved doors are ajar — and a group of mosaics from a Roman McMansion that were only discovered in 1959, when the ground under the nearby Plaza de la Corredera was excavated in order to refurbish the market. What a gorgeous surprise! 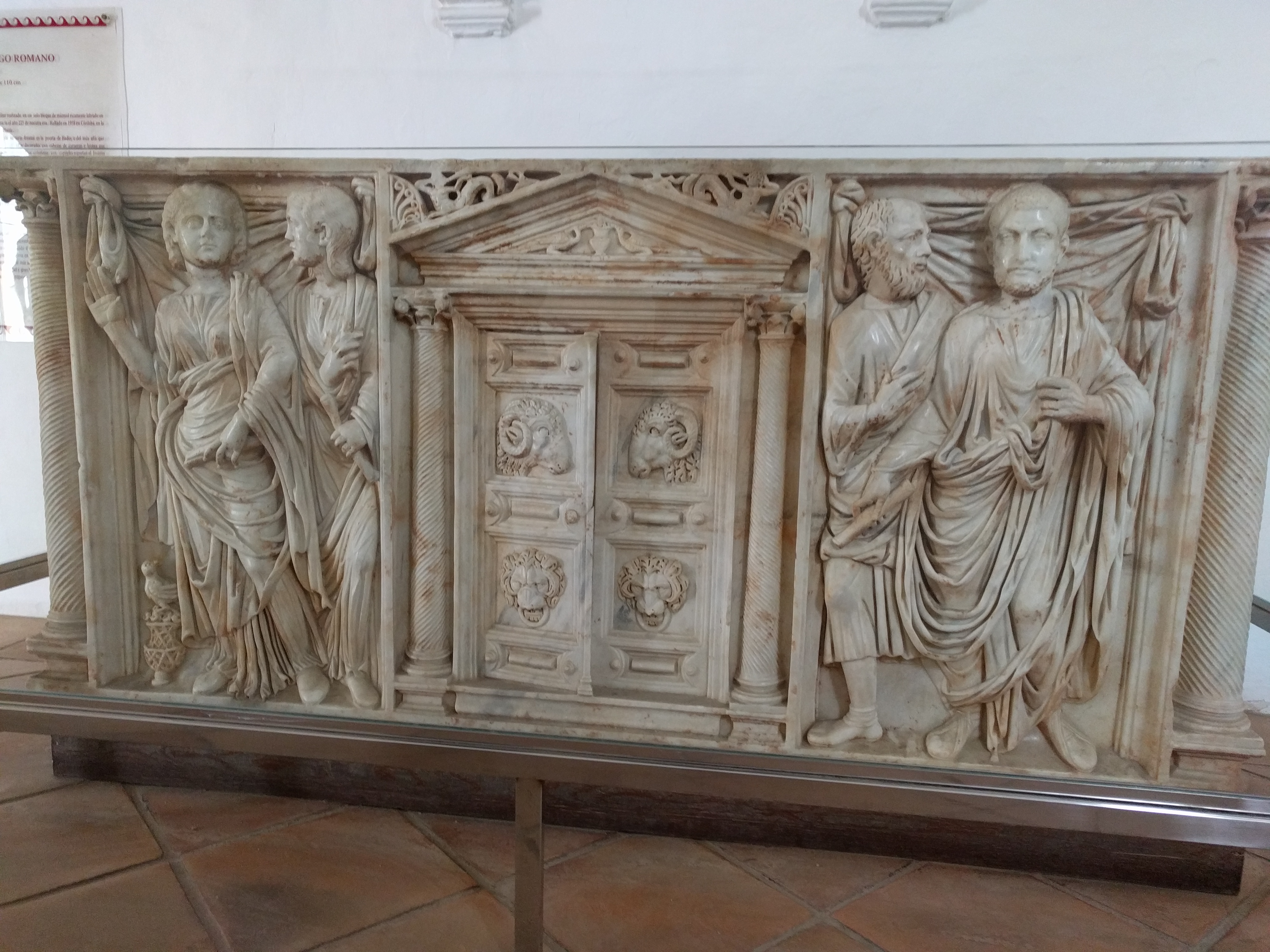 I recommend also a stroll along the Guadalquivir river, where you will see outdoor bars, wheels from ancient mills, and feral Siamese cats. 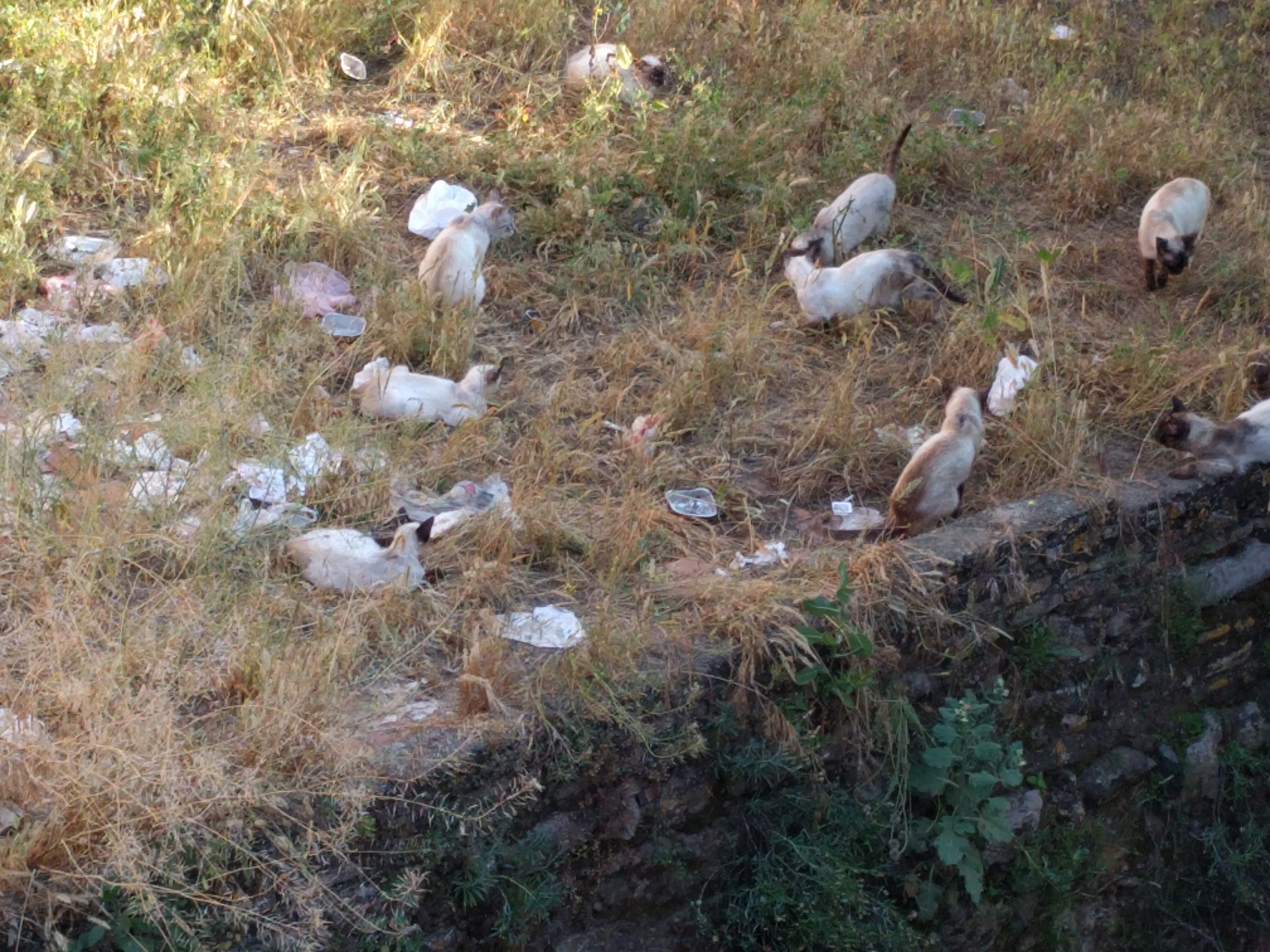 Our favorite place to hang out, though, was the Kurtuba Gastro Bar, where one can relax and enjoy excellent salmorejo (a thick cold tomato soup, quite distinct from gazpacho) and perfect croquetas while admiring the resurrected columns of a Roman temple across the plaza.

I was especially looking forward to Sevilla because I’d basically missed it the first time around due to illness. The city did not disappoint. Its two main attractions are the cathedral and the Real Alcázar. We bought tickets ahead of time for the Alcázar and spent hours exploring the gorgeous rooms and gardens. It was a perfect marriage of natural and man-made beauty, and likewise a felicitous combination of Arabic and later styles. The cathedral was impressive, especially Columbus’s tomb, and we enjoyed the hike up the Giralda tower, except for the crowds and selfie sticks.

From an academic perspective, my favorite destination in Sevilla was the Archivo de las Indias, located between the two other sites. This houses Spain’s official records of the colonial period. The ground floor has a permanent exhibition of some of the institution’s treasures, including the original Treaty of Tordesillas, which divided the New World between Spain and Portugal, and the “Capitulación of Santa Fe”, the contract between Christopher Columbus and the Catholic monarchs Ferdinand and Isabella. It was amazing to see these precious documents up close.

Sue and I both wanted to spend a night at a parador — a government-run luxury hotel — and so backtracked slightly on the road to Córdoba to stay at the one in the small town of Carmona, which my Top 10 guide book described as “one of the most impressive of all paradors”. For centuries Carmona’s hilltop setting gave the town a strategic importance, and the parador is located on the top of that hill, cheek-by-jowl with the ruins of the town’s Alcázar. Besides swimming in the inn’s outdoor pool, and sipping sherry at sunset on the terrace while admiring the view, we had a hard-working touristic morning exploring the Roman necropolis, located a ten minutes’ walk from “downtown” Carmona. This was one of the most interesting Roman ruins either of us had ever seen, and was amply signed and interpreted, with a museum housing the relics found in the tombs, including a carved elephant (!).

Here is a picture of Sue emerging from a Roman tomb: 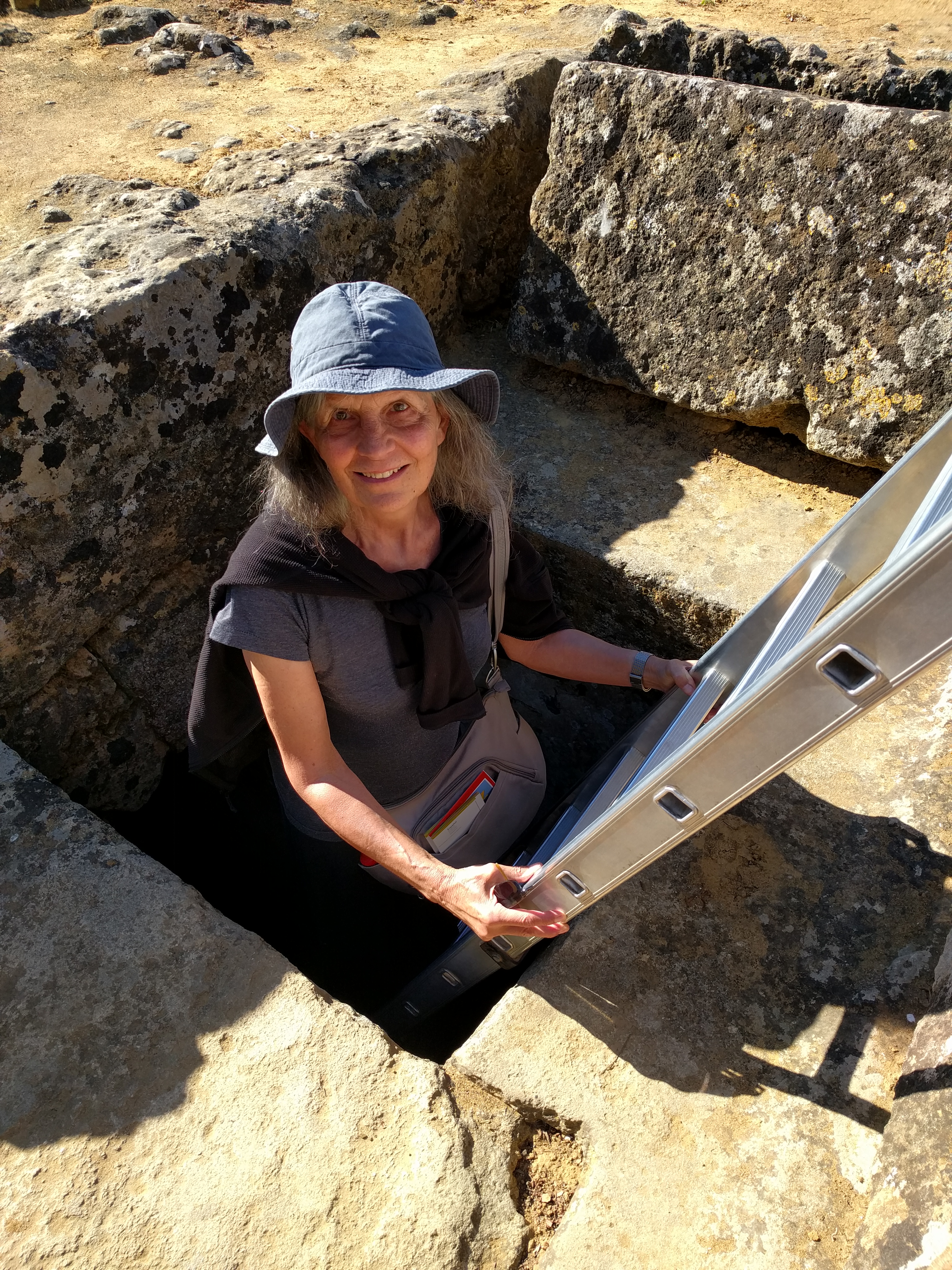 We happened to be at the necropolis when a group of schoolchildren were visiting. They were treated to an educational re-enactment of a gladiator fight, and so were we. 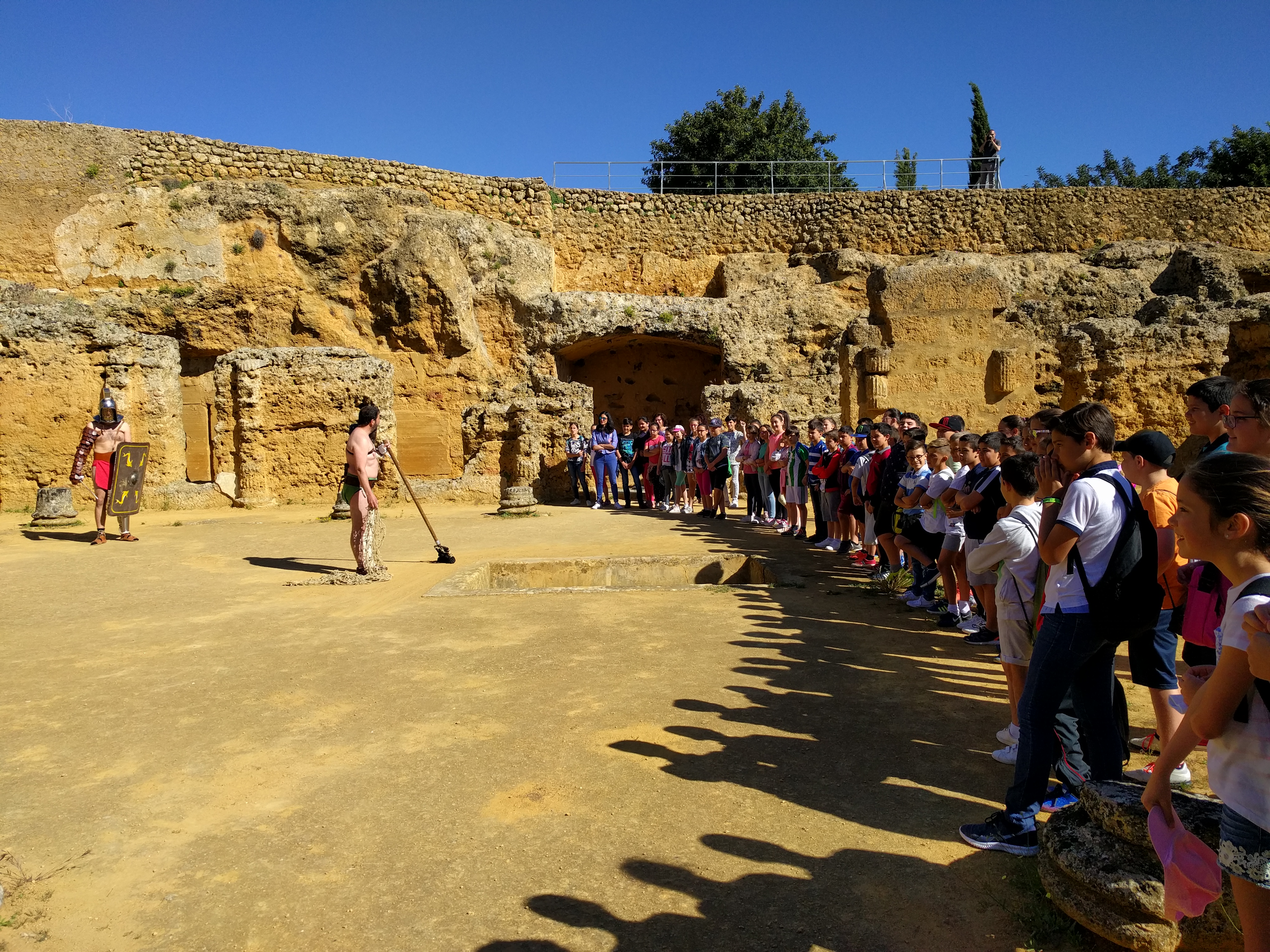 The parador wasn’t expensive (it was cheaper than our digs in Cádiz), and we both thought that if you had a rental car it would be a great jumping-off point for a longer stay, with day trips to Sevilla and Córdoba as well as hikes in the countryside. Not to mention swimming and sherry.

From Carmona we took the bus back to Sevilla and then a train to Cádiz, an ancient city with a strategic peninsular location on the Atlantic. Here we rented an apartment and settled in for two nights. During the day we dipped our toes in the ocean at nearby Caleta Beach, saw a really cool camera obscura built into an old tower, and walked all over the city. It’s a small town so you can get to know it fairly well in just a day, although a longer stay would be fun in beach season.

The hilltop town of Ronda lies between Cádiz and our final destination of Granada, so we spent a night there at the fabulous little Hotel Ronda (our favorite lodging during the trip). Ronda is famous for its gorge and bridges. We basically spent half a day exploring the east side of the gorge, including the Arab baths and the rose garden, and half a day exploring the west side, hiking down into the gorge. We also had the best food of our trip at Casa Mateos.

Granada’s main attraction is the Alhambra complex, containing the Palacios Nazaríes, the Alcazaba fortress, the Generalife summer palace, and many gardens. Based on my previous  trip to Andalucía we decided to visit the Alhambra twice, and this turned out to be a wise decision as the complex is so large and the crowds are daunting (despite timed tickets for the Palacios Nazaríes). The first day we visited the Palacios, a bit of the gardens, and the Alcazaba, which has fabulous views. We also enjoyed tea on the terrace at the parador, which has great views of the Generalife. The second day we explored the Generalife, where we had an illegal picnic on a bench in the gardens, and spent about an hour at the excellent museum within the Alhambra complex. Here’s a picture of some happy artichokes growing in the Alhambra gardens. 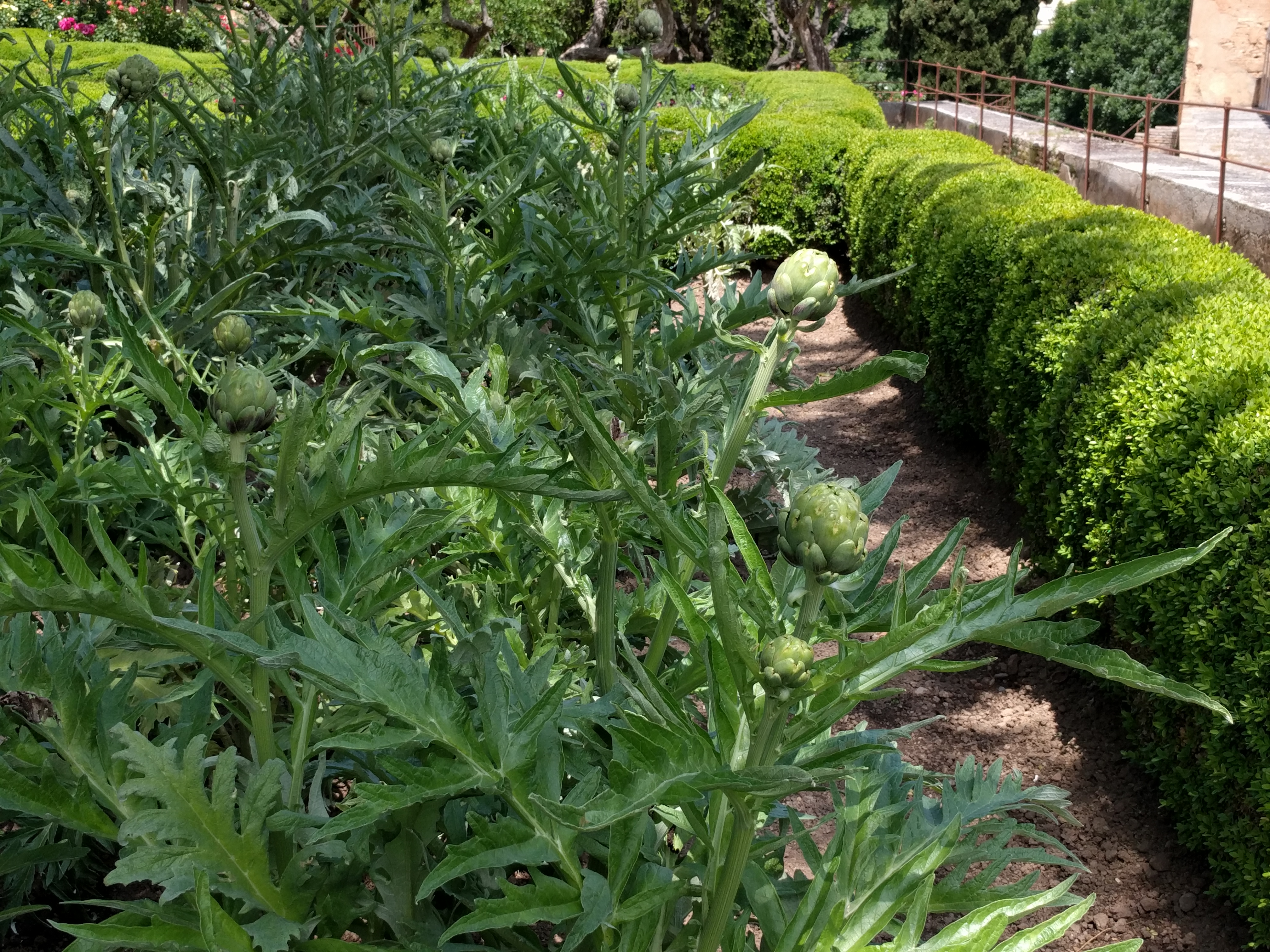 We rented a comfortable and light-filled apartment across the street from the Cathedral — two thumbs up for Casa de la Lonja! We bought food at the nearby Corte Inglés department store’s supermarket (tortilla española, gazpacho in a milk carton, flan, passable paella, excellent wine selection) and at the traditional market near the Cathedral.

Two specific sites I recommend besides the Alhambra are the Monasterio Cartuja, about a half hour walk from the Cathedral, and the Capilla Real adjacent to the Cathedral. The Monasterio features an over-the-top baroque chapel. Given how austere the monks’ lives were in general, entering the chapel must have been a daily shock to the senses. The monastery also features vivid (and sometimes gory) paintings by Juan Sánchez Cotán, a former painter of still lifes (I saw one in the Prado) who joined the order in his 40s, changing his life and his subject matter. The Capilla Real houses the bodies of the Catholic Monarchs (Isabella and Ferdinand) and Isabella’s personal art collection, which included paintings by Botticelli, Van der Weyden, Memling, and other masters. Not too shabby.

As a lover of all things Spanish who happens to be a modestly observant Jew, I usually don’t have any difficulty reconciling these two passions. But when I entered the Capilla Real and saw the tombs of Ferdinand and Isabella, I felt a wave of intense anger over what these leaders had done to my people back in 1492. Religion leads people to do the most awful things.

Sue and I flew from Granada to Madrid (the photo at the top of this blog is from the bathroom at the Granada airport), and I had a brief stopover in Madrid before flying home the next day. This gave me enough time to visit my favorite paintings at the Prado and the Thyssen-Bornemisza (no time for the Reina Sofía), walk through the Plaza Mayor and the Puerta del Sol, and attend a performance of El burlador de Sevilla, the original Don Juan play, first performed five hundred years ago and still going strong.

On my next trip I want to visit Asturias, and perhaps other northern destinations I’ve never seen, such as Santiago de Compostela, San Sebastián, and Bilbao. And something of the Pyrenees. Yikes!