I certainly confront a lot of bad Spanish in my professional role as a Spanish teacher. And on this blog, I’ve called out several examples of bad Spanish in street signs, Trader Joe’s packaging, and the like. So it was refreshing when, on my recent trip to Andalucía, I started to notice examples of bad ENGLISH — that is, bad translations from Spanish into English — in signage created with English-speaking tourists in mind. I’ve included some examples below, with explanatory captions. 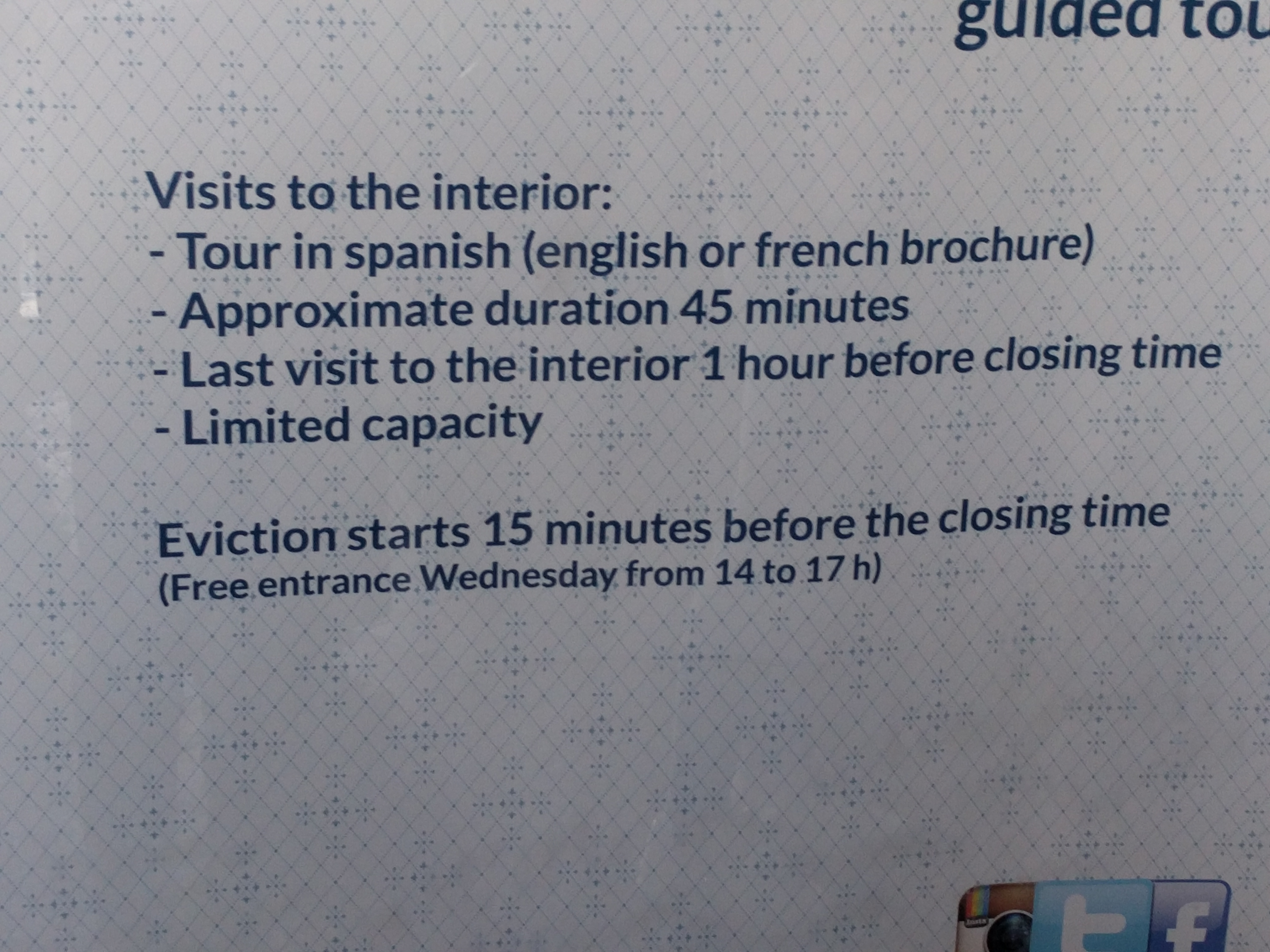 This “eviction notice” was by far my favorite example of “bad English” on the trip. How about “Please exit 15 minutes before the closing time”? From the Palacio de Viana in Córdoba. 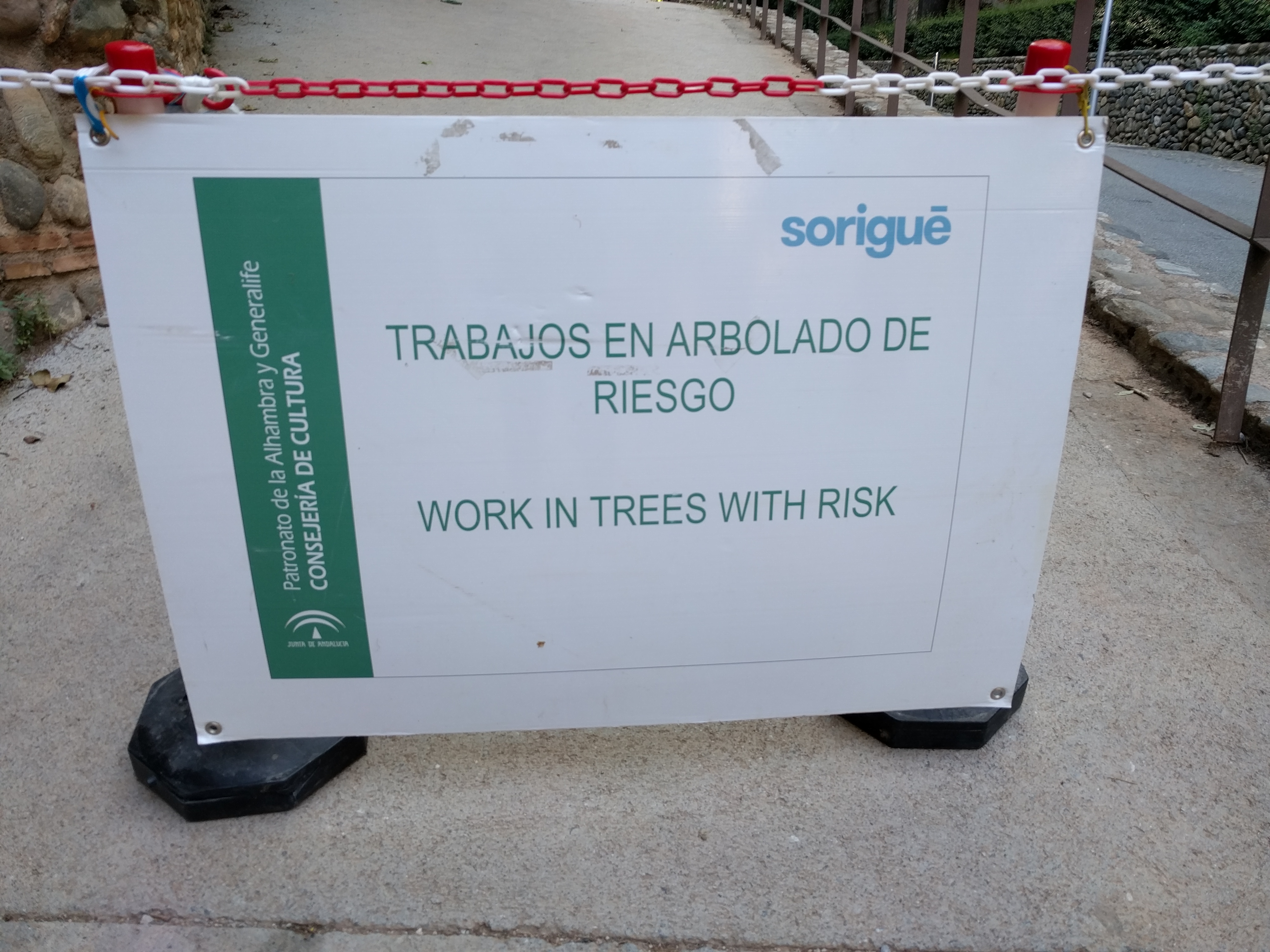 A better translation might be “Danger! Tree work!” Cádiz. 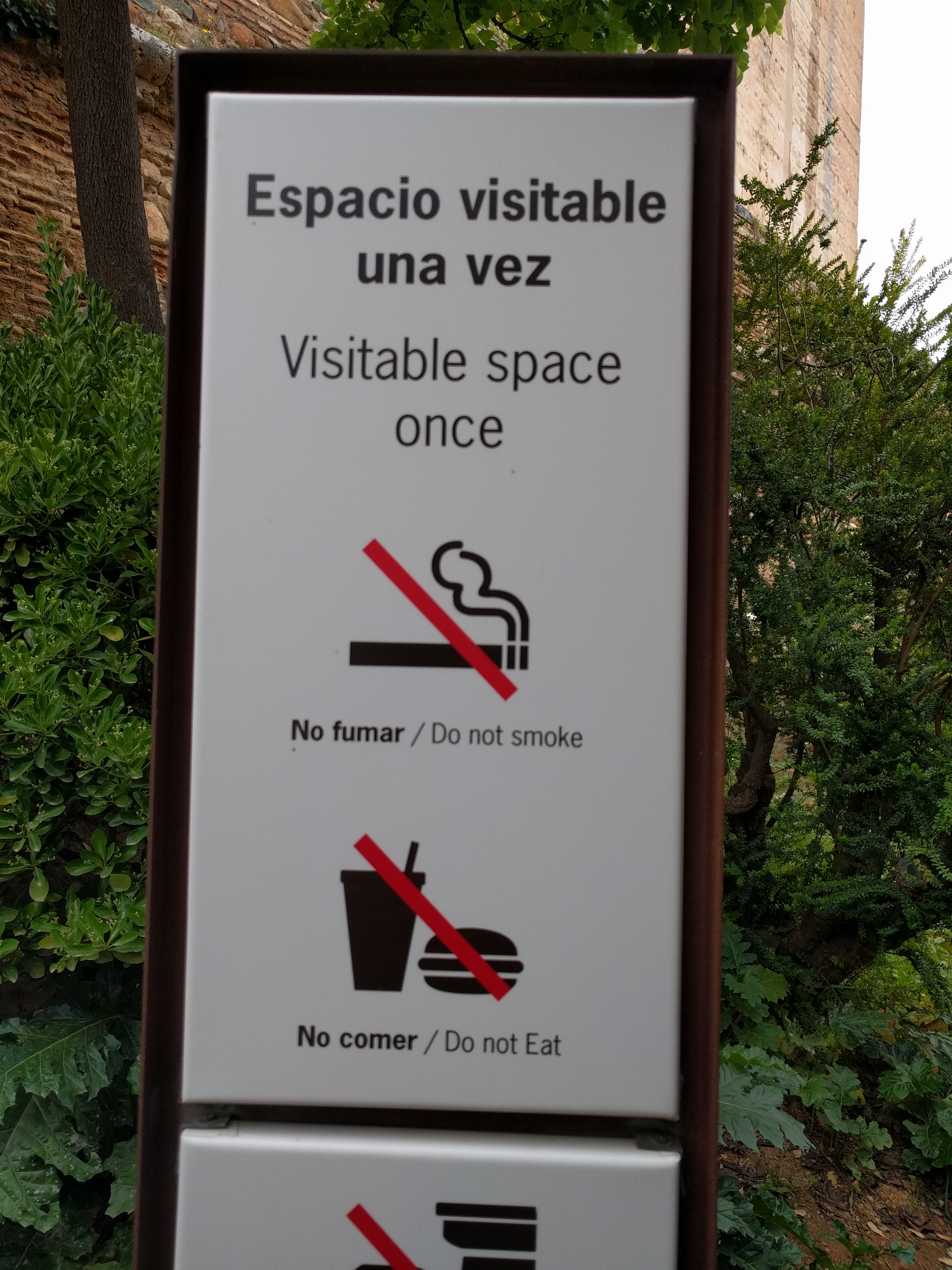 The problem here is the first element in the sign. A good translation might be “One entrance per ticket.” 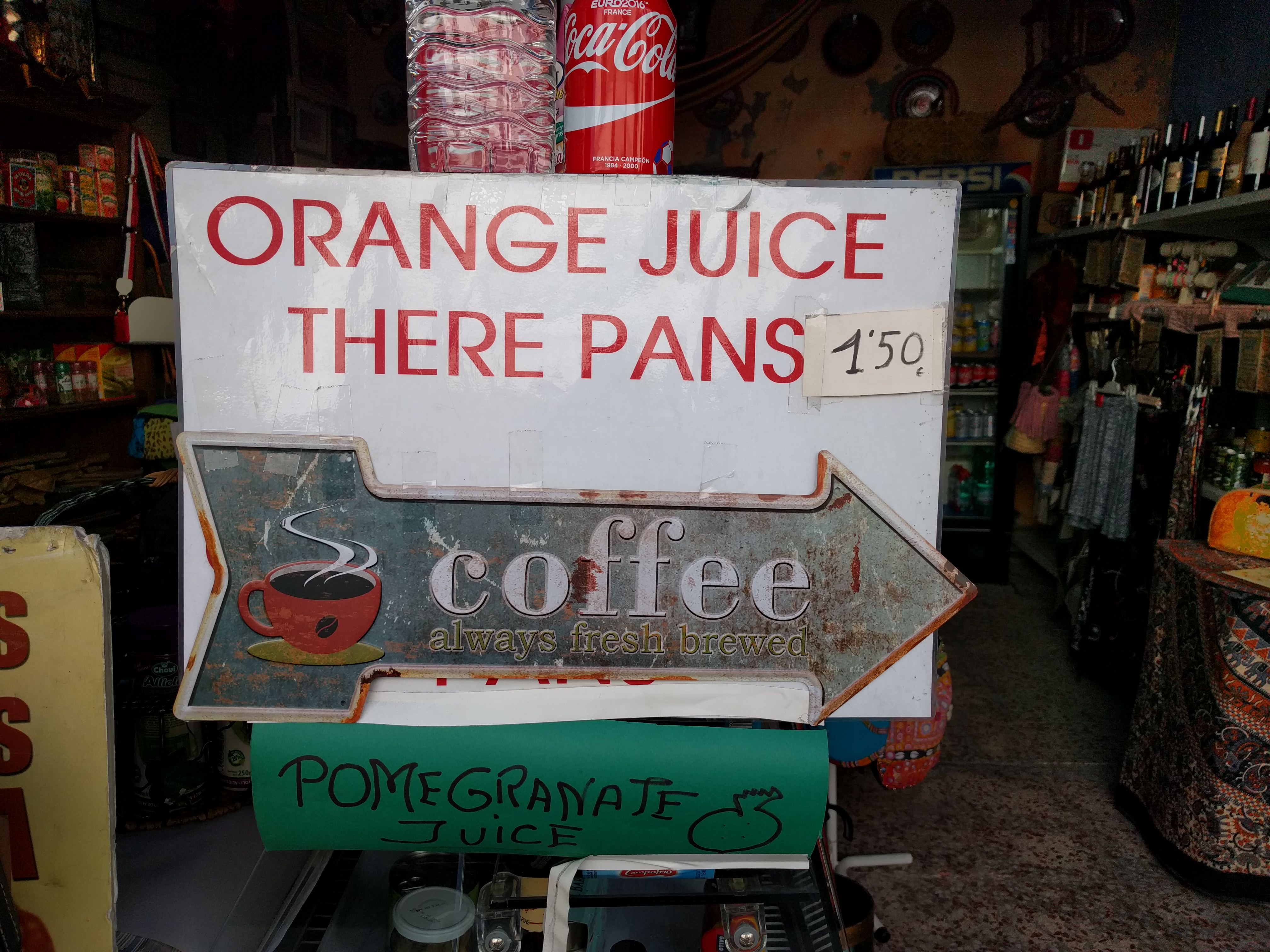 This was the most intriguing “bad English” sign I saw in Spain. Perhaps the author was trying to translate “Hay pan”: ‘There is bread’, i.e. ‘We have bread.’ 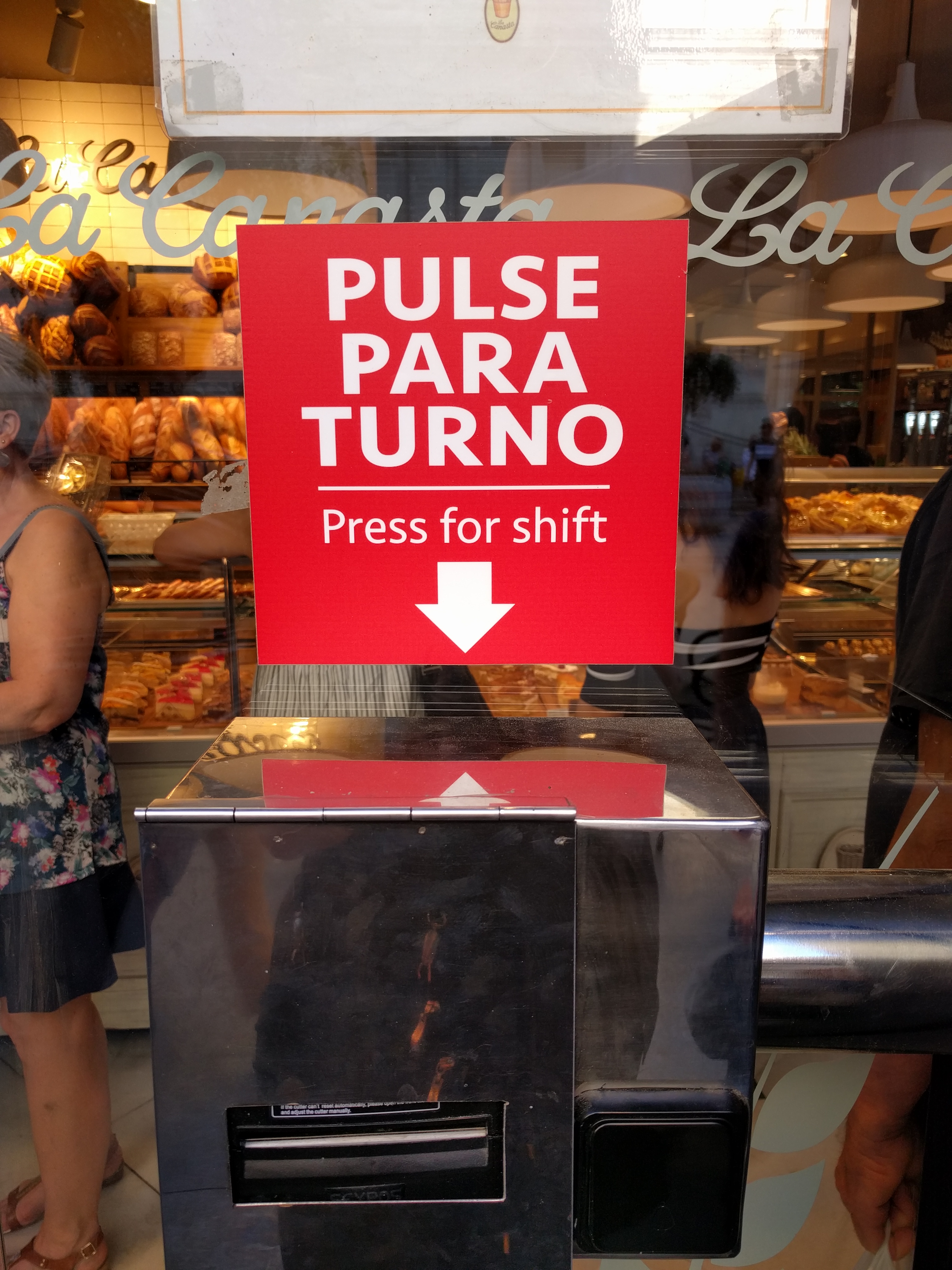 A “turno” can indeed be a work shift (e.g. 9-5), but the correct translation here would be a simple cognate, i.e. “Press to take a turn” or perhaps “Press for ticket,” with the turn-taking function of the ticket merely implied. Picture taken at La Canasta bakery in Sevilla, across the street from the cathedral. 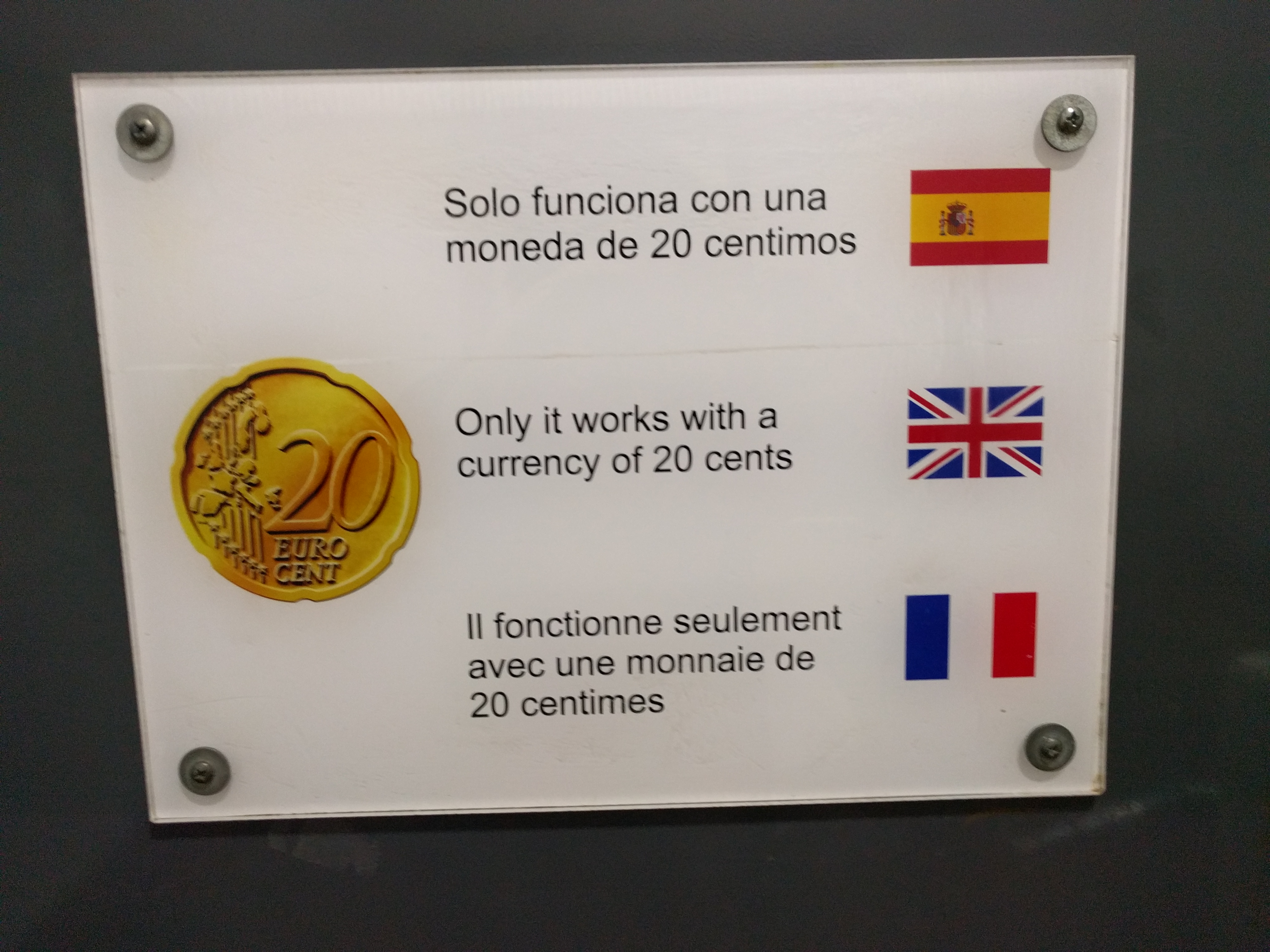 What a lovely bit of scrambled syntax! The French translation, in contrast, looks fine to me. 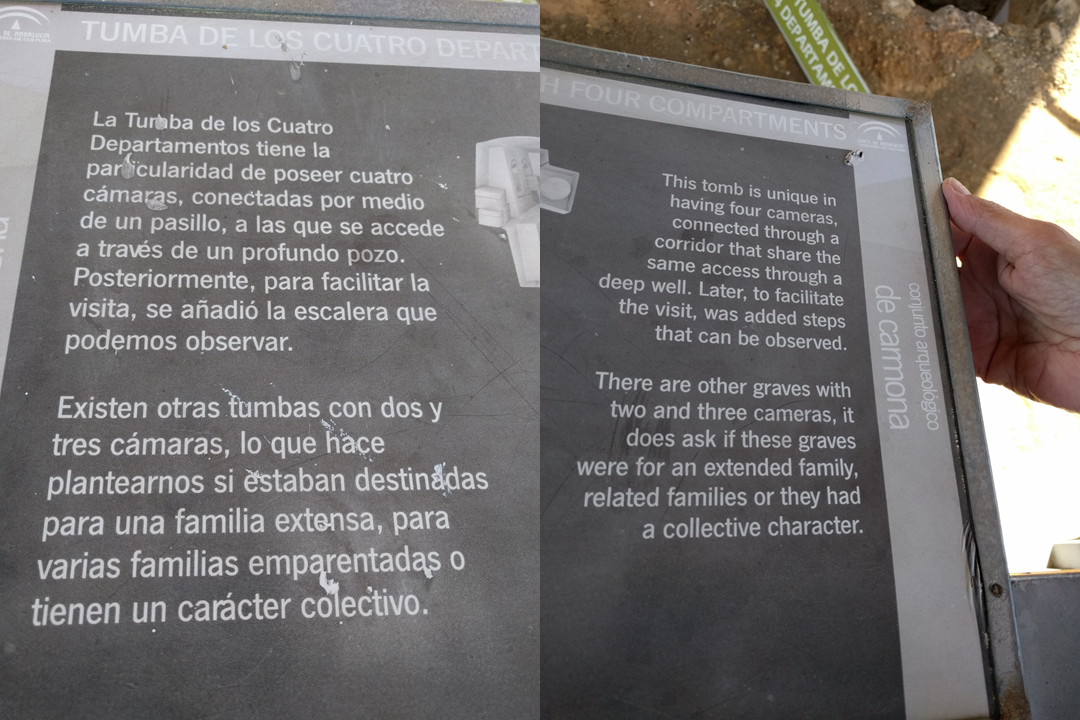 The four “cameras” in this famous tomb at the Carmona necropolis are rooms, not pieces of photo equipment. Indeed, the English word “camera” can be traced to the ‘room’ meaning of the Latin root via the “camera obscura” device.

[Here is a post I wrote about the trip afterwards.]

Two years ago, my consuegra Sue and I spent two weeks touring northern Spain, following an itinerary inspired by my research on the history of the Spanish language. On Friday we’ll meet up again in Córdoba to launch a two-week follow-up trip of Andalucía (southern Spain). This trip is purely touristic, though of course I’m looking forward to hearing Andalucían Spanish. Also, while in Seville we plan to visit the Archivo de Indias, which houses the records of the Spanish colonial period. It was Peter Boyd-Bowman’s research on these records that proved the Andalusian origin of Latin American Spanish (see Ralph Penny’s A History of the Spanish Language, p. 26).

This map shows our itinerary, looping counter-clockwise from Córdoba through Sevilla (the regions’s capital), the important port city of Cádiz, and the famous hill town of Ronda, ending up in Granada (poorly indicated on this map for some reason), where I’ve pre-purchased tickets to visit the Alhambra. Twice. You can’t see it on the map, but after Sevilla we’ll double back to spend one night in Carmona, a small town on the road to Córdoba (you can just see it to the right of the “A-4” marking east of Sevilla), so we can stay at its beautiful parador.

When I get back from Spain I’ll be hitting the road inside the United States: attending a wedding in Maryland, visiting grandkids in Philadelphia, touring Yosemite, visiting family in Salt Lake City, and grading Spanish AP tests in Cincinnati. I don’t expect to be blogging during these travels, so most likely you’ll hear from me again in late June. Wish us a ¡Buen viaje! 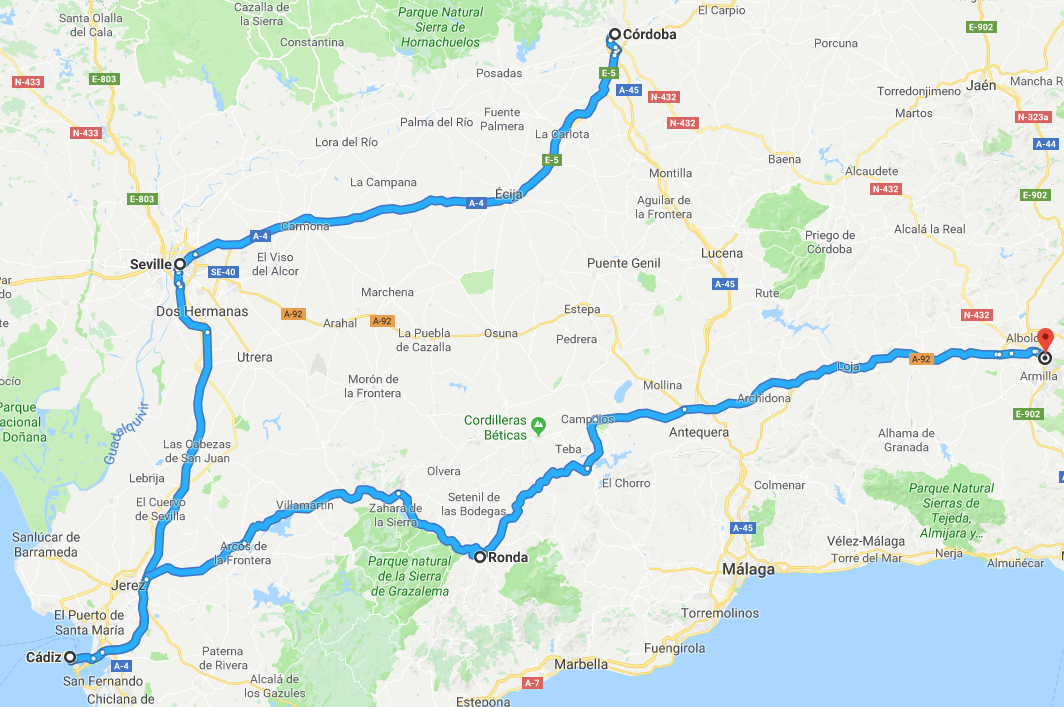