I wish I had been able to think of a catchier title for this post. But if you think that pronouns are intrinsically interesting (I do! I do!), the idea of multiple generations of polite pronouns should be irresistible.

Spanish speakers and Spanish students all know about tú and usted, the two ways to say “you” in Spanish. Tú is for equals (friends, family) and inferiors (babies, pets), while usted is for superiors (teachers, policemen, bosses). Tú comes straight from Latin, whereas usted was derived in the 1500s from the respectful phrase vuestra merced, or “your mercy.” I always picture its coinage as looking something like this: 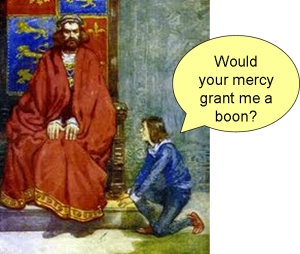 What few Spanish speakers realize is that usted is the language’s second polite pronoun. The first, vos, started as the Latin word for plural “you”, or “y’all”. (In modern Spanish, this is expressed with vosotros and ustedes.) By the time Rome conquered the Iberian peninsula, Latin vos had taken on the additional meaning of polite “you”. This double duty persists in French, where vous means both polite and plural “you”.

But by the 1500s, vos lost its mojo, so to speak, and became more or less interchangeable with tú. Usted then came into vogue as its replacement.

it’s interesting to note that the pronoun dance described above demonstrates three common processes in the evolution of pronouns:

In a later post I’ll explore the additional interesting question of why Spanish replaced vos instead of just doing away with the informal/polite distinction altogether. (And no, it wasn’t just to torment future Spanish students.)