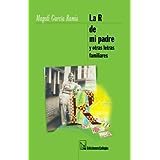 Above all other aspects of correct pronunciation, our family insisted that we use the proper erre. “Don’t say egjjrre, like a peasant, say erre“….When we wanted to vex our family we reverted proudly to the egjjrre, which was improper, which was for peasants and which, incidentally, was the erre of my father, who somehow never fit into the household…He always used that guttural egjjrre, ancient and prolonged, that we never heard in lessons at schoool or at home. That egjjrre tied him to his hometown of Salinas and to his soldier buddies….When I feel close to Spanish, the language that is my inheritance and my passion, it’s not Spanish itself, but our satisfying Puerto Rican tongue…. [It’s] the egjjrre, as much a renegade as the Puerto Rican nation has had to be to survive for 500 years, the egjjrre of my father.

What other dialectal variants of Spanish pronunciation are so emotionally charged? Please share your ideas.