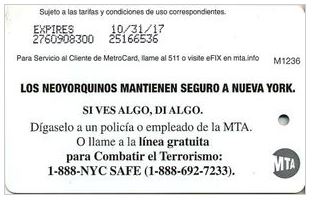 I just took advantage of Fordham’s spring break to spend a few days at my favorite place, the Kripalu Center for Yoga & Health in Stockbridge, Massachusetts. Besides yoga, dancing, lifestyle classes, the whirlpool, and lots of reading and napping, I enjoyed some excellent food. However, Tuesday’s lunch buffet line contained a Bad Spanish gem: 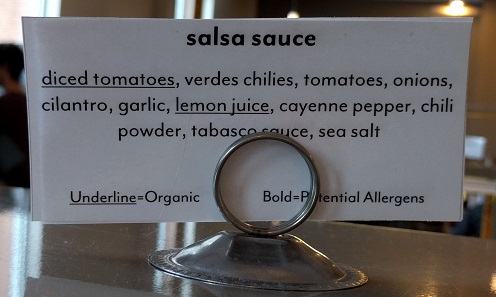 Salsa, of course, means ‘sauce’, so that Salsa sauce means ‘sauce sauce’. This error reminds me of some usages I noticed when attending graduate school at Stanford University, where students swim in Lake Lagunita (‘lake lake’) and drive on The El Camino (‘the the road’).

The salsa, however, was delicious!

[An addendum: my son Aaron helpfully pointed out that the second ingredient, verdes chilies, is a remarkable combination of Bad Spanish and Bad English!]

It’s great that more Spanish speakers, along with other Americans, are being covered under Obamacare, but I had to wince when I saw this photograph in the New York Times. How hard would it have been to put an accent on inscríbete, and inverted question marks before the shirt’s five questions?

Just nit-picking — mostly, I was thrilled to see the Spanish.