When I planned my linguistic tour of northern Spain, I hoped that today’s itinerary would be the best conceivable combination of intellectual engagement and touristic pleasure. In fact, it exceeded my expectations.

The intellectual part of our day (“we” being my friend Sue and I) was a visit to the Greco-Roman ruins at Empúries on the Costa Brava. This site made it onto our itinerary because, as referenced in this post’s title, Empúries is where Latin came to the Iberian Peninsula. The Greek ruins at the site date from the sixth century B.C.E. They memorialize a thriving settlement devoted to trade: in fact, the Greek name for the settlement, Emporion, means ‘market’. The Greeks traded actively with the native Iberian tribes, including the Indikites, whose capital city of Ullastret Sue and I visited yesterday. The Roman ruins at the site date from the beginning of the first century B.C.E.

The touristic part of the day was swimming at the fantastic beach located JUST YARDS AWAY from the ruins. How great is Spain?!? 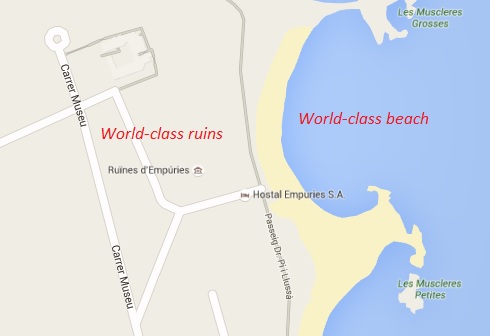 I enjoyed the the Greek ruins at Empúries more than the Roman ruins. This was partly because I hadn’t expected them — I had assumed that the Romans overbuilt the existing Greek city, whereas in fact they co-existed (see explanation below). Also, these were the first Greek ruins I’ve ever seen, whereas I’ve seen Roman ruins elsewhere in Spain and also in France, Italy, and Israel.

The Greek ruins include houses, temples, factories for smelting metal and salting fish, an agora, or public plaza (a frequent crossword puzzle word!), and a water system. Their water cisterns were noticeably deeper than the ones we saw at Ullastret yesterday (sorry, Indikites). My two favorite Greek sights from Empúries are illustrated below. The first is a mosaic-tiled banquet hall, whose inscription translates as ‘how sweet it is to be reclined.’ The second is a statue of Asklepíeion, the Greek god of medicine. These two features struck my both for their beauty, and for personal reasons: the “reclining” mention reminded me of the fourth question of the Passover seder, while the statue of Asklepíeion reminded me of my daughter, who is a doctor. (Once you’re a mom, you see the world a little differently.)

Greek tiled banquet hall. The inscription translates as ‘how sweet it is to be reclined’. 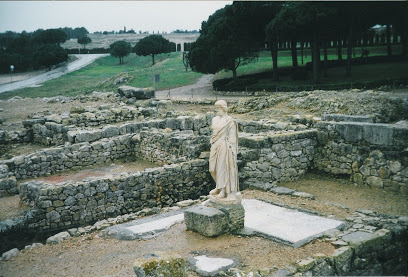 Statue of Asklepíeion, the Greek god of medicine

Our main mission at Empúries, however, was to see the Roman ruins, and thus learn more about how Latin came to Spain. A wall panel at the museum at the ruins offered this helpful summary of how the Second Punic War against Carthage led to this fundamental and irrevocable change in the Iberian Peninsula and its languages:

In the year 218 B.C., the Roman army landed at the port of Emporion, an allied city, with a view to cutting off the Carthaginian rear-guard on their way to Rome. Once the war was over, the Romans wanted to control and exploit the adjoining territory, a process which initiated the conquest of the Iberian Peninsula. This process, known as Romanization, included two stages. The first, of conquest and military domination, did not lead to changes in native culture and organization. The opposition of the natives to the new power resulted in the establishment, in the year 195 B.C., of a Roman military camp, on the upper part of the hill of Empúries, so that the country could be controlled and peace maintained. The second stage, which started at the beginning of the first century B.C., entailed the absorption of the various existing societies into Roman culture. New cities were created, such as Empúries itself, Gerunda [Girona] or Tarraco [Tarragona]; a major road network was developed, whose main axis was the Via Augusta; development of the land was carried out according to the Italic models based on the creation of country houses of villae and, lastly, the progressive use of Latin was promoted and new religious cults were introduced. Assistance given to the Romans by the Emporitan Greeks meant that they could enjoy a status of independence within the newly built Roman city.

The Roman ruins were much larger than the Greek section, and included a stunning private house with a different mosaic pattern in each room.