I titled this post last week, before leaving for my linguistic tour of northern Spain with my friend Sue. As it turned out, our visit to the Museo Casa de Cervantes in Valladolid was not the high point of the day, though we did appreciate its peaceful garden, and the reliefs depicting scenes from Don Quixote, such as this one. The museum is located in the building where Cervantes lived from 1604 to 1606; the first volume of Don Quijote was published in 1605. 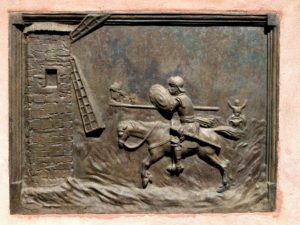 Valladolid was our stopover en route from Salamanca to Burgos, and well worth a visit. Its star attraction is the Museo National de Escultura, an extraordinary collection of medieval, Renaissance, and Baroque religious sculpture housed in a magnificent convent. My favorite sculpture depicted Saint Anne and her three husbands (!!!) with the Madonna and Child. The husbands were carved with great individuality and detail. 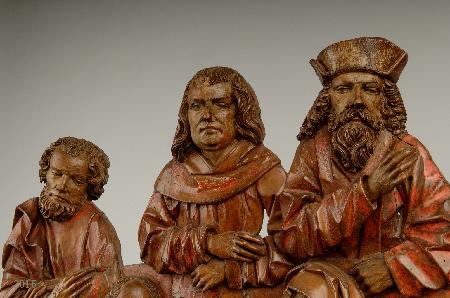 While in Valladolid i noticed this nice example of the arroba neutra: the contemporary and controversial use of the @ sign in Spanish to create suffixes that are neither masculine nor feminine suffixes. (The sign translates as “Welcome refugees”.) Anybody know how something like this is pronounced out loud? 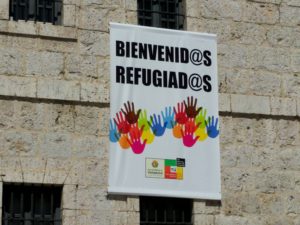 After leaving Valladolid it was exciting to arrive in Burgos, since this was the city that inspired my trip: Burgos is the cradle of the Castilian language (though in Salamanca we were told it was Salamanca!). Our hotel directly overlooks the city’s cathedral. Five minutes’ walk away is the famous statue of El Cid, Burgos’s hometown hero, which turns out to be in the middle of a busy traffic circle! I found this rather undignified. All the photographs I’ve seen of it show the Cid silhouetted against the sky, perhaps with a bit of building. Now I know they were carefully composed. 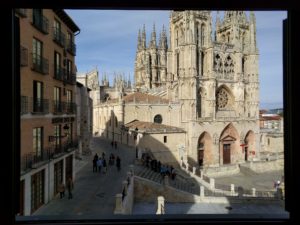 El Cid and his horse in Burgos, juxtaposed with more modern transportation.

While out walking we unexpectedly came across a status of San Millán de la Cogolla, the saint whose linguistically significant monastery we will be visiting in a few days. Although San Millán was a cave-dwelling hermit, the statue depicts him as a conqueror, standing boldly atop a collection of severed heads. Wikipedia helpfully explains that “Because of the monastery’s role on the traditional pilgrimage route, representations of Emilianus can be mixed with that of Saint James the Moor-slayer.” 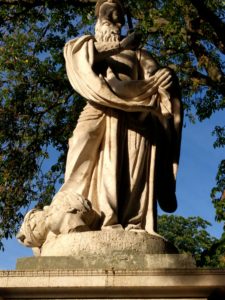 2 thoughts on “Another day, another Cervantes museum”