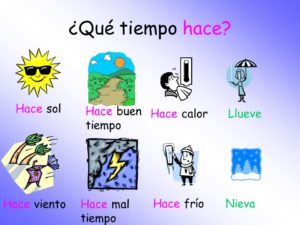 [On Halloween, I turned in the manuscript for the book on Hispanic linguistics I’ve been working on for the past 5 years (¡Uy!), and expect to be getting back into more regular posting now that I have more time.]

A contributor to the Spanish subreddit posted some time ago about a terrific website for Spanish learners, called Readlang. Frankly, I don’t know much about Readlang except for what I’ve seen while playing around with the links on the subreddit post, but I strongly recommend that you check it out if you learn or teach Spanish. Each Readlang entry (at least the ones linked to on this post) has a video of a series of speakers reading different thematic passages in Spanish, with the passages reprinted below. You have the usual video controls, plus the ability to slow down or speed up the video. A cursor in the reading passage shows your current location. You can click on any word to get an instant translation.

The entry labeled “Day, Date” gives the country each speaker is from. (I wish all the entries had this feature, but “chiggers can’t be boozers”.) Truly awesome — many thanks to the folks at Readlang and to whoever posted these specific entries on it.

I just stumbled across a fun feature on the Real Academia’s website: an interactive map that lets you find country-specific dictionary entries:

As an example, if you mouse-hover over Cuba, you will see that the country has 1892 acepciones, or lexical entries, in the dictionary. Clicking on the country brings you to a list of these entries. Some words on the list are used only in Cuba, such as abakuá, meaning a member of a men-only secret society. Others are general Spanish words with uses specific to Cuba. For example, in Cuba abanico ‘fan’ can refer to a wooden device that signals to a train conductor the correct branch of a track fork to take.

To my disappointment there are no acepciones for the United States, even though we have our own branch of the Academia, and more Spanish speakers than Spain. In contrast, the Philippines have 88 entries even though Spanish is no longer spoken there. Not fair!

While we were living in New Mexico, a family from Argentina moved in next door. At the time I had neglected my Spanish for a while, but I liked to think that it was still there when I needed it. And in fact, I was delighted to find that I could easily converse with our new neighbors. I actually felt pretty smug.

Until the day, that is, when the phone rang while I was visiting next door, and my neighbor launched into an intense conversation with someone from home. Her Spanish sped up, her accent became more pronounced, and I could barely follow what she was saying (not that it was any of my business).

This little anecdote has more to say about my (probable) rustiness in Spanish, and my neighbor’s politeness in accommodating her Spanish to my non-native ears, than it does about Spanish dialects. For in fact, different varieties of Spanish are just as mutually comprehensible as varieties of English. A Spanish speaker from Madrid may have initial difficulty understanding Cuban or Argentine Spanish, just as an American does Australian or Scottish English, but that’s as far as the problem goes. One’s ear adjusts pretty quickly. That’s why Spanish-language films and telenovelas don’t provide Spanish subtitles for foreign distribution any more than English-language films and TV programs do. In fact, Spanish-speaking friends I have polled insist that the range of variation is smaller than in English.

Education plays a major factor in helping Spanish speakers around the world understand each other. Depending on where one lives, some dialectal features, like the weakening and loss of final /s/, can be associated with low socioeconomic status (not unlike ain’t in English). The speech of two educated Spanish speakers from different countries can therefore be more similar than that of two people from the same country, or even the same city, from opposite ends of the socioeconomic and educational spectrum. Moreover, educated speakers are more aware of dialectal differences and so better able to understand and/or accommodate. For example, just as a sophisticated English speaker from the United States isn’t thrown off by British vocabulary (lift for elevator, lorry for truck, and the like), a well-educated Spaniard will understand that Argentineans use vos, not tú, to mean “you.” At the same time, an Argentinean who is aware that his use of vos is non-standard can accommodate to the Spaniard by trying to use tú instead.

Why is Spanish as consistent as it is? It’s partly because all modern dialects of Spanish stem from two varieties of Spanish spoken in Spain in the 16th century: either castellano (standard Spanish, exemplified by the speech of Madrid) or Andalucian Spanish, exemplified by the speech of Seville. This was a small range of variation to begin with. Moreover, during the four hundred years or so that Spanish has been a world language, several factors—the existence of a language standard, increasingly widespread literacy, the availability of books and the mass media, and now the Internet—have provided centralizing ballast to the centrifugal force of language change. It remains to be seen how long they can continue to do so.