Since my travel companion during my recent trip to Andalucía doesn’t speak Spanish, I inevitably spoke mostly English while there. (I’m making up for this by speaking tons of Spanish while grading AP tests in Cincinnati.) Nevertheless, I had as many Spanish conversations with strangers as I possibly could, and also kept my ears open to expose myself, as much as possible, to Andalusian Spanish.

I’ve long been academically familiar with Andalusian Spanish, of course, meaning that I knew about its features from reading about them. And I knew that most of these features are shared with Latin American Spanish because, as demonstrated by Peter Boyd-Bowman, the Spaniards who immigrated to Latin America during the colonial period were disproportionately Andalusian. However, it was exciting to hear this kind of Spanish spoken around me in its home territory.

The Andalusian feature that means the most to me personally is the tendency to weaken or drop -s sounds at the ends of words and syllables. “Personally”, because my first linguistic research, as a Harvard undergraduate, was on this same phenomenon in Puerto Rican Spanish, and its possible consequences for subject pronoun usage in Puerto Rican Spanish. This research eventually led to an article published in Language, the prestigious flagship publication of the Linguistic Society of America, which as you can imagine was a healthy way to start my career. So every mimo (instead of mismo), gracia (instead of gracias), and so on sounded like a friendly blast from my past.

One hazard of dropping your s‘s frequently is that you can forget which words actually have them, and start to make mistakes in your spelling. A case in point is this poem, by María de los Ángeles Martínez González. which we saw set into a wall along a street in Cádiz. The words escuches and madres were cast in ceramic without their final s‘s, which you can see in this online version of the poem. This linguistic point aside, the poem is heart-breaking. 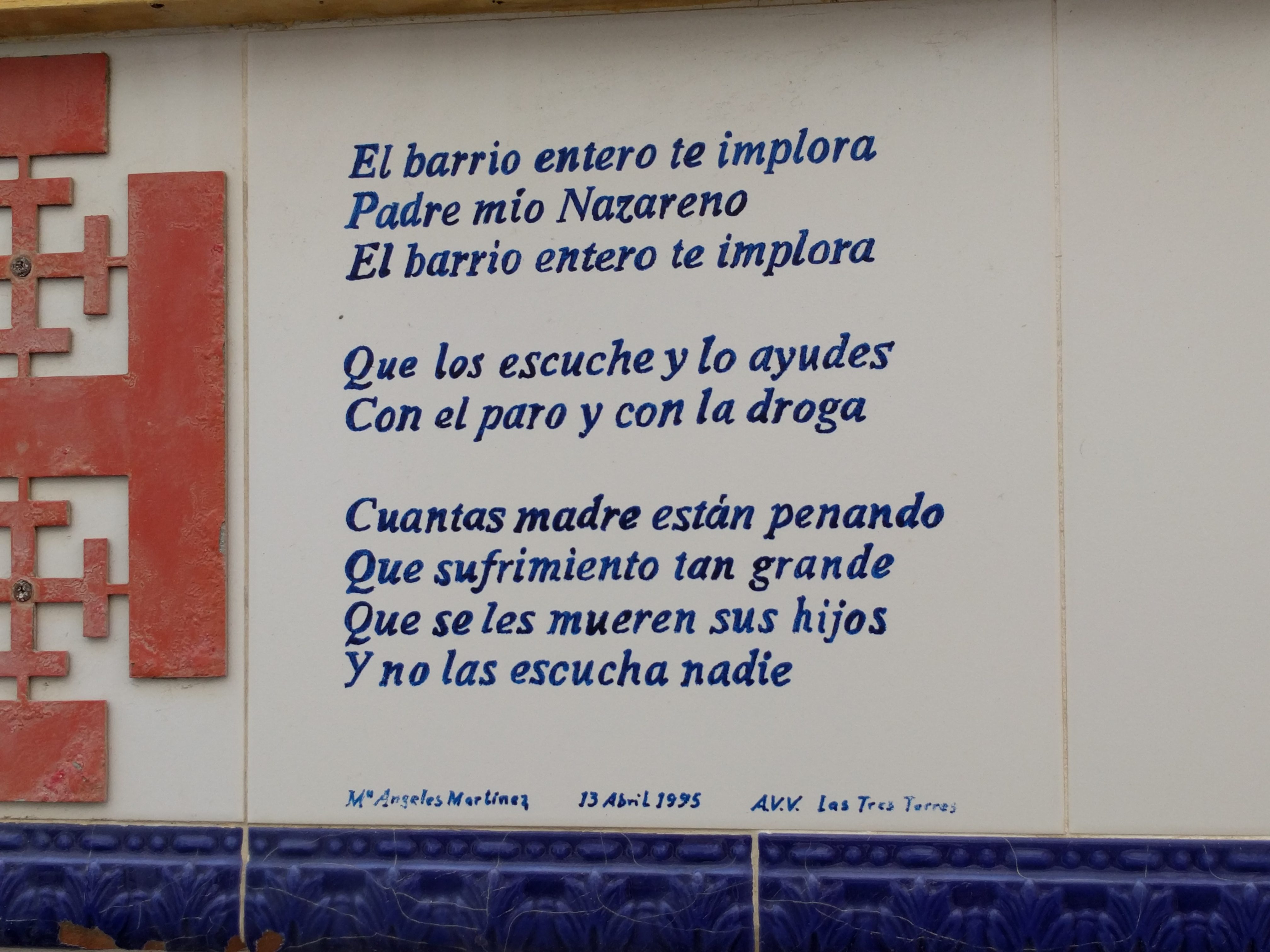 Another common Andalusian feature is the weakening and deletion of the d sound between two vowels. This is actually a downstream version of the historical process of “lenition” that, centuries ago, turned Latin t‘s into Spanish d‘s, and likewise Latin k and p sounds into Spanish g‘s and b‘s (vita > vida, focum > fuego, lupus > lobo).

While on the same stroll through Cádiz I did a double-take when I saw what looked like another dialect-influenced spelling mistake on a historical marker memorializing a famous flamenco artist who was both a singer and a dancer: in standard Spanish, both a cantador and a bailador. Here, these two words were spelled without their d: cantaor and bailaor. After seeing the same spellings elsewhere I learned that they are, in fact, the legitimate terms for a flamenco singer and dancer. You can see the corresponding Real Academia dictionary entries here and here. So in this case lenition has gone legit. 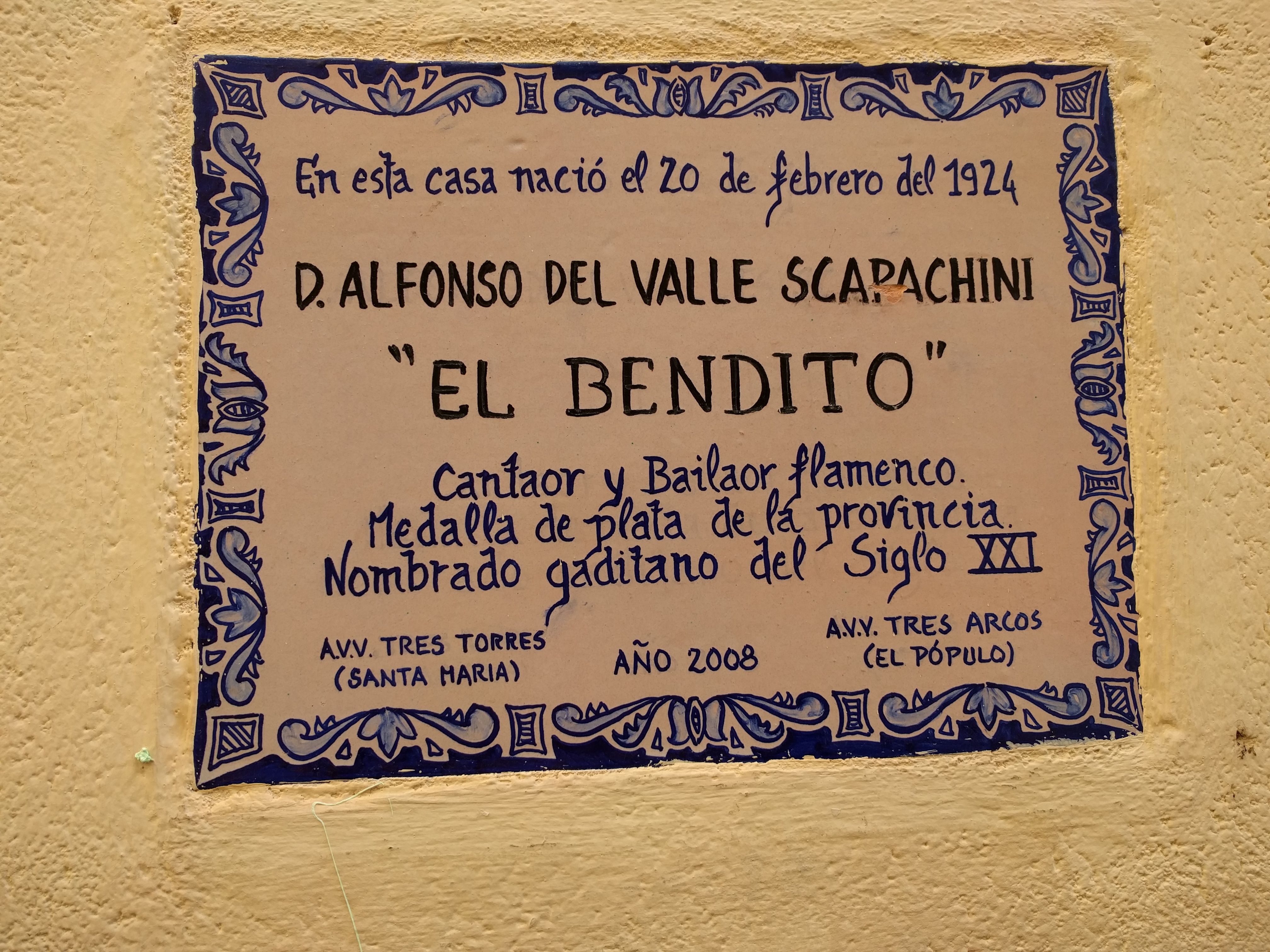 Two final accentual anecdotes. First, struck by the non-Andalusian accent of one tchotchke seller I was chatting with in Granada, I asked if she was from out of town. She explained that she deliberately neutralized her accent when talking with non-Andalusians. Would you believe there’s a linguistic term for this? It’s called “linguistic accommodation”. Second, when I overheard a family group speaking in what I first thought was Italian and then realized was Spanish, I correctly inferred that they were from Argentina. Spanishlinguist scores! Actually, Argentinian Spanish is a softball dialect to identify…but still fun, especially when you hear it so far afield.