Regular readers of this blog know that I am constantly reading Spanish-language fiction — usually of the popular variety — both for pleasure and to continue improving my Spanish. I generally read without a dictionary, using context and cognates to deal with unfamiliar words, just as I advise my students to do. If I am really stuck, or just curious, or have seen a word a few times and want to “officially” learn it, I’ll look it up, usually in wordreference.com.

It’s extremely rare that after using context, cognates, and a dictionary I still find it hard to understand how a word is used. The verb restar is one of those cases.

I first ran into restar when rereading one of my favorite Spanish novels, Jordi Sierra i Fabra’s Cuatro días de enero, which I’ve already written about on this blog seven times. In describing the awkward gait of a disabled man, Sierra i Fabra writes that

My brain kept trying to rewrite the noun dificultad ‘difficulty’ as difícil ‘difficult’. The phrase le restaba difícil ‘remained difficult to him’ made sense in isolation, but didn’t work in this context.

Restar clearly called for a dictionary lookup. Wordreference.com informed me that it means not just ‘remain’ but also ‘diminish’. The second meaning got the job done: the sentence meant ‘Having moved like this during his life didn’t diminish its difficulty, even though he made it look easy’.

This use of restar turns out to be a robust pattern; you can find examples of it with other following nouns on Linguee.com, a website I’ve been using a lot recently to find examples of Spanish words and phrases in context. Here’s a screenshot: 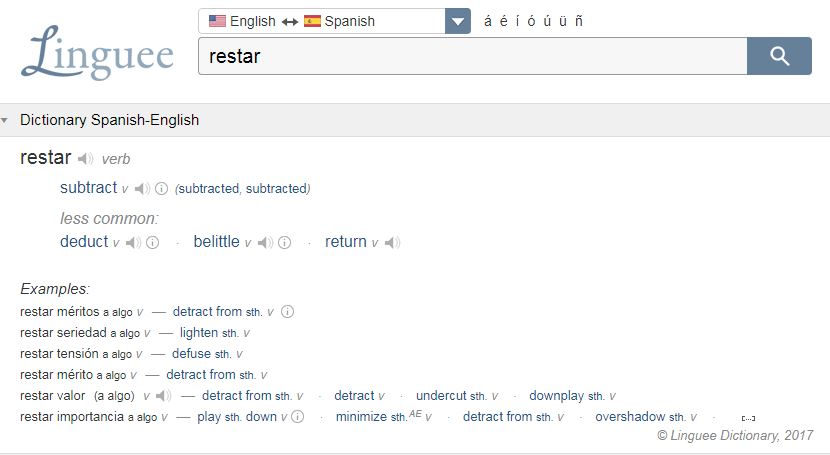 Restar also appears in Sofía Segovia’s Huracán, which I recently blogged about here. In this passage, Lorna notices that the only part of her awful husband’s back to escape a painful sunburn is where she had attempted to apply sunscreen herself:

His whole back, except for — and this struck Lorna as so funny that it reduced the seriousness of the problem — was the sharp white shape of her two hands, which seemed to cut through the blister.

It took some effort, and even a return visit to wordreference.com?, to understand this second example. Likewise, even though I now completely understand the restaba dificultad sentence, I still can’t read it smoothly, but always have to stop and think through its use of the verb.

I can think of several reasons why it’s so hard for me to wrap my brain around this verb:

5 thoughts on “Why can’t I wrap my brain around the verb “restar”?”