I arrived in Madrid this morning and am taking a jet lag day before beginning my linguistic itinerary in earnest tomorrow. I’m happy as a clam to be back in Spain and surrounded by Spanish — specifically, Spanish Spanish. I’ve already seen a nice example of the typically Spanish extended use of tú (our airplane breakfast was served in a box that wished Que tengas un buen viaje), and an advertising poster with the vosotros verb form sois.

The most Spanish thing I’ve seen so far, leaving aside the language, is this “No food or drink” decal on the airport tram: 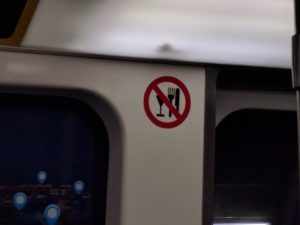 A similar sign in the U.S. would never in a million years feature a wine glass!