I woke up this morning determined to nail down citable examples of something I’d read online and in Ralph Penny’s A History of the Spanish Language: that words like drama, enigma, and tema, which are masculine in modern Spanish, were often treated as feminine in earlier forms of the language. These -ma masculine were borrowed from Greek via Latin; they were neuter in gender in both ancient languages.

My starting point was Ralph Penny’s mention of:

However, the RAE’s first dictionary did not back up BlogoLengua’s examples. The words were either not in the dictionary (apotegma, fantasma, sofiama) or defined as masculine (clima, dogma, drama, enigma, primsa) or as ambiguous in gender (aroma, cisma).

I had better luck using another RAE tool: its marvelous CORDE, or Corpus Diacrónico del Español, which provides instant search access to Spanish texts “desde los inicios del idioma hasta el año 1975”, i.e. from the dawn of the language until 1975. One can customize a search by time interval, author, and other variables. Here is the search I did for enigma, using the time limit suggested in the BlogoLengua post:

This search found 219 examples. I found it most helpful to look at them in “concordance” mode, which shows each example in a one-line context:

Columns further to the right (cropped out here for display purposes) include the author, title, and country of each work cited, its theme (novel, legal document, etc.) and publication data.

On this list you can see a mixture of masculine and feminine uses of enigma. On the second result page I found my favorite example, from none other than Cervantes, the author of Don Quijote. Clicking on the word enigma in that example brought me to the full citation, from p. 399 of his first novel (pub. 1585), La Galatea: 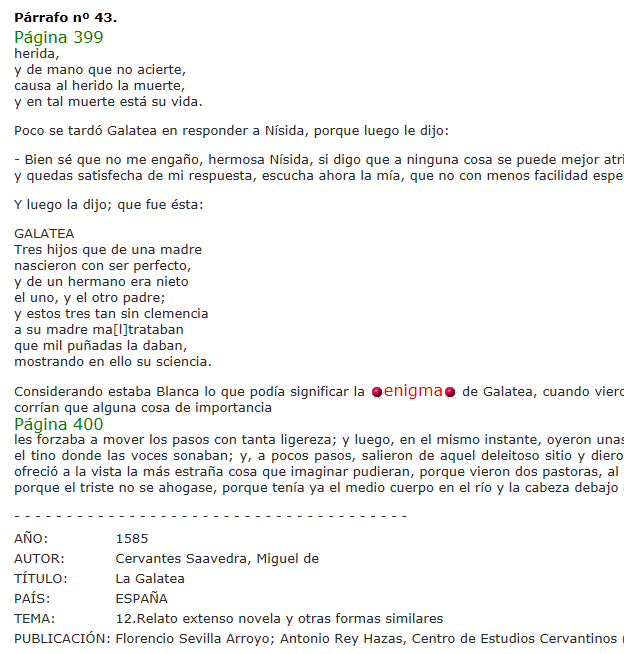 What could be a better example of early feminine usage of -ma masculines than la enigma de Galatea? That one is going straight into my book.

Using CORDE I was able to verify most of the other words listed in BlogoLengua. Examples ranged from the title of a 16th century work by Juan Rufo (Las seiscientas apotegmas) to a line from a poem by Lope de Vega about the climate of the New World (¿Es la clima ardiente o fría?) and a reference in a 15th century medical text to las dogmas evangelicas.

Thank you, RAE, for a truly enjoyable and productive intellectual morning.

One thought on “Fun with CORDE”