In a previous post I wrote about the Spanish “invention” of the formal pronoun usted, the polite way to say “you” when talking to a stranger, a teacher, a police officer, etc. To recap: in the 1500s the polite pronoun vos had lost its formal connotation and was in the process of disappearing. The new coinage usted, derived from the polite expression vuestra merced “your mercy”, replaced it.

Why bother? English lost the informal/formal distinction between thou and you back in the 17th century, and we get along fine with a single “you” pronoun. Why not Spanish?

The simplest, yet most intriguing, explanation is that by maintaining an informal vs. polite distinction, Spanish was falling in line with a regional trend. As shown in this lovely map from the World Atlas of Linguistic Structures (WALS) Online, the two-way politeness distinction became the norm all over Europe (yellow circles) as languages achieved their modern form. English turns out to be one of the few exceptions on the continent. 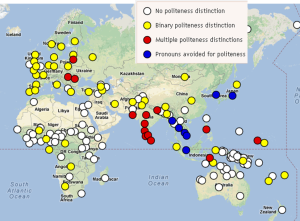 This “keeping up with the Joneses” uniformity (or should I say, with the Müllers, Smirnovs, Rossis, and Martins?) is especially impressive because the languages of Europe aren’t even all related. Most are Indo-European, but others are Finno-Ugric, Altaic, and Basque. Also, the languages used different techniques to create their polite pronouns. Some drew on plural (y’all-type) pronouns (Turkish siz, French vous); some, like Spanish, on formulaic expressions (Romanian dumneata from “your lordship”); and still others on third-person pronouns (e.g. German Sie, from “they”, and Italian Lei, from “she”).

Politeness in second person pronouns is thus an excellent example of what linguists call an “areal” feature: one that arises, as if by conspiracy, in geographical clusters of languages regardless of their genetic relationship. You can see other clusters in the map above, and also in the Americas, whose native languages are mostly politeness-free (here’s the relevant WALS map): 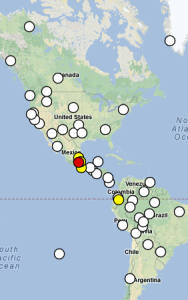 As with any large-scale trend, whether in language, food, or clothing, it’s hard to reconstruct the details of how this particular feature spread across Europe. I’ve seen one account that cites Spanish as a trend-setter, and another that focuses on the key role played by Latin, while referencing other authors who assign the lead to French. It’s also possible that no one language served as an inspiration, but rather that budding polite pronoun usage in each language reinforced the same tendency in the others. But Spanish was definitely a player in this zeitgeist — and still is today.

[Update from 12 August 2013: The author of the article linked to through “one account” above has provided me with a citation for her assertion about German modeling its pronoun usage on Spanish. It comes from C. J. Wells, German: A Linguistic History to 1945.  Clarendon: Oxford University Press, Oxford, 1985, p. 274-5.]

One thought on “Why Spanish invented usted”