This “heads-up” function motivated the Real Academia, or Spanish language academy, to invent the inverted marks in the first place, back in 1754. Thirteen years earlier, the Academía had published its first Ortographía, or spelling guide, of the Spanish language (the title was modernized to Ortografía in all later editions). The 1741 Ortographía proposed that normal ! and ? marks do double duty to mark both ends of exclamations and questions, as in ?quien me llama? or !que misericordioso es Dios! (p. 266).

Not surprisingly, this idea appears to have been a dismal failure. When the Academia’s spelling committee reconvened in 1754, they proposed today’s ¡ and ¿ marks instead, explaining (my translation): 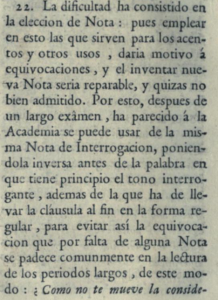 The second time, they got it right, thus providing one of the world’s few examples of successful linguistic innovation by committee.

[Note to the picky reader: the image above is actually from the 1763 edition of the Ortografía (p. 140), which uses the same wording as the 1754 edition but is much more legible.]